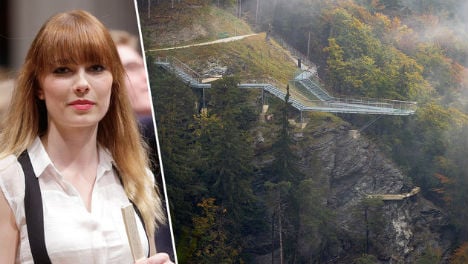 The 26-year-old had been in a critical condition after plunging off the side of the Bergisel mountain near Innsbruck on Friday afternoon – a fall of around 30 metres.

Doctors at Innsbruck University Hospital said she died on Monday evening at 10.30pm. She had serious head injuries, a lung trauma and injuries to her pelvis.

Shortly after hitting the ground, Kadic managed to call her brother and inform him of the accident before losing consciousness. Her mother immediately called the emergency services.

Two students discovered her near the Drachenfelsen (Dragon rock) panorama platform overlooking the steep ravine of the Sill river. She was rescued by helicopter and taken to Innsbruck hospital.

The exact circumstances surrounding the accident remain unclear, but police said the 2013 beauty competition winner was an avid runner who knew the area well.

After winning Miss Austria Kadic withdrew from public life and worked as an assistant in a fashion boutique in Innsbruck. “The media, the events, the parties – that life made me so unhappy,” she told Seitenblicke magazine earlier this year.

Some 115 people died and 2,385 were injured between May and September in the Austrian alps, according to latest statistics.