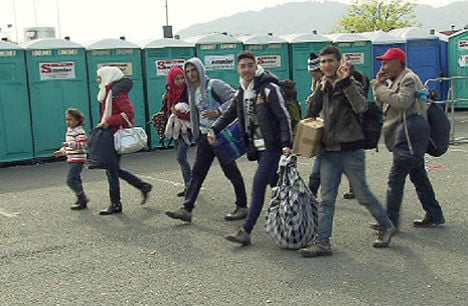 After Hungary closed its border with Serbia and Croatia, the influx of refugees into Austria has shifted from Nickelsdorf in Burgenland to Spielfeld and Bad Radkersburg in Styria. The refugees are being transferred from the border to temporary shelters in Graz and Klagenfurt.

Slovenian authorities said on Monday that they had refused to let in more than 1,000 refugees arriving from Croatia after a daily quota had been reached, stoking fears of a new human bottleneck on the western Balkan route.

Desperate refugees were forced to spend the night in freezing temperatures near rail tracks after police stopped them from walking across the border dividing the two EU states.

Austrian police spokesman Joachim Huber told the ORF broadcaster that several thousand people are expected to cross into Austria on Monday, and that they will be cared for by Red Cross teams.

Long lines have also formed on Croatia's border with Serbia. Several hundred people remained stuck there on Monday morning, after having spent the night in rain and cold weather, an AFP photographer said.

Slovenia stressed on Sunday it would remain firm in its decision to handle up to 2,500 migrants a day — half the amount demanded by Croatia — to help ease pressure on both its own and Austria's borders.

“There are no restrictions in place,” interior ministry spokesman Karl-Heinz Grundböck told AFP on Monday.