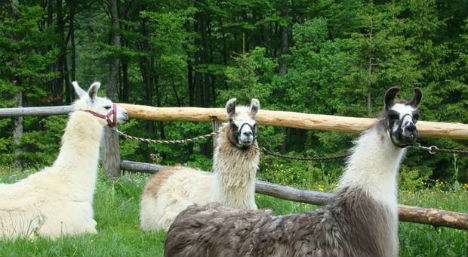 Some of the llamas in Stockenboi. Photo: Private

Local authorities inspected the farm in late summer, which is home to 60 llamas in total. “Hygienic shortcomings and feeding deficits were found,” district commissioner Bernd Riepan said. A vet was asked to monitor the farm, and Riepan said he since received a letter saying that the site was being properly run.

“I am not to blame – the animals were healthy and were examined just two weeks ago,” he told the Kurier newspaper. He said that he looked in on the llama paddock in Stockenboi last week, and that a neighbour takes care of the animals on a regular basis.

District commissioner Riepan and a veterinarian carried out a site inspection on Tuesday morning but didn’t reach any conclusions as to what caused the animals’ deaths.

“We haven’t been able to rule out animal cruelty or poisoning,” Riepan said. He added that it was possible that the llama’s food had been contaminated by faeces. In addition, their paddock is at a high altitude and offers little for them to graze on.

Krammer has been told to provide his animals with another pasture which has better quality grazing, or to give them supplemental food.

The farmer has said that he will ask for an autopsy to be carried out on the dead llamas, as it's in his own interest to know why they died.

Llamas, which are more closely related to camels than other domestic livestock, are primarily farmed for their hair – and for meat in South America.