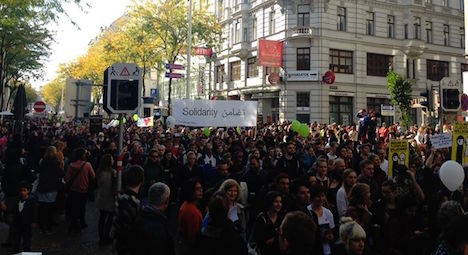 Austria has been a key transit point for many refugees reaching eastern Europe, and organisers said their bid to show public solidarity drew some 60,000 into the capital's streets.

Police put the total nearer 20,000 as a good-natured throng converged in front of the railway station from where many of the refugees have continued their odyssey through to neighbouring Germany.

Charitable groups and NGOs called the rally with the slogan “Welcome Refugees!”

“All refugees are welcome, whether their flight be due to war, persecution or other causes,” a spokesman said as the marchers wound their way down the central Mariahilferstrasse thoroughfare before coming to a halt outside parliament.

“It is important to show solidarity and welcome refugees and show that in Austria we have a liberal and welcoming culture,” one marcher who gave his name as Georg told AFP.

CHECK OUT THE GALLERY FROM SATURDAY

Mariahilferstrasse was decked out with some 2,000 portraits of migrants in order to “put a face to the figures” of the thousands who have streamed in over recent months after transiting through neighbouring states.

Despite Saturday's show of support the influx has caused some concern in Austria, whose far-right Freedom Party (FPOe) has drawn nearly level with the ruling Social Democrats in Vienna ahead of October 11 elections in the capital city state, according to a recent poll.

Saturday evening was to see further festivities in the form of “solidarity concerts”, capped with a speech by President Heinz Fischer.

Thousands of Austrians have mobilised to offer help with logistics as the refugees have flooded in.

Last month, almost 170,000 people entered Austria, most of whom travelled on to Germany and beyond.

But the 8.5 million-strong Alpine country still expects a record 80,000 asylum requests this year and is currently processing 53,000 requests.