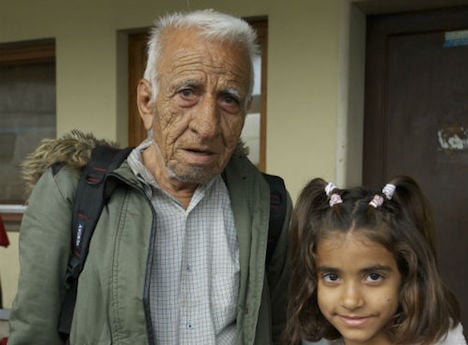 An elderly man from Aleppo, Syria, waits for news of whether he can travel to Germany with his granddaughter. Photo: Kim Traill

“Mohammad Abo Khaled (64) From: Syria. He was on his way to Greek island last contact: 20/8/2015,” reads a post next to the photo published on a Facebook page for missing refugees.

The 64-year-old is but one of many who have disappeared or been separated from their relatives as they cross waters in rickety boats, crowd onto trains or press through chaotic border crossings on their way through Europe, leaving families desperate for news.

“We're a little overwhelmed by the situation,” admits Wilhelm Odde, in charge of the International Red Cross's European department for missing people.

More than 360,000 people have made landfall in Greece this year, many of them Syrians fleeing all sides of their country's conflict, setting off on a long, exhausting journey through the Balkans and Hungary to reach the safety of countries in northern Europe.

'My father is an old man'

The exact number of people who have gone missing along the way is hard to come by, as aid groups struggle to keep up with Europe's worst human exodus since World War II.

“We're dealing with people who are moving very rapidly,” Odde explains, saying that people may report their loved ones missing in one place but quickly move on.

“They're heading to lots of different countries and often get stuck on their way in countries which were not their initial target, and so it's difficult to track them down.”

Even those with mobiles or tablet computers — and there are many — are hard to reach as their devices run out of power and they struggle to find free WiFi.

Mohammad Abu Khaled, from Damascus, had been living in a refugee camp in Jordan, where living conditions are tough.

He went missing on the day he was to cross the sea from Izmir in Turkey to the Greek island of Lesbos, a waypoint in his journey to Denmark where his son Khaled Abu Khaled now lives.

He was with his daughter-in-law's brother, who says he left him on the beach momentarily, only to find him gone when he came back.

“He couldn't find my father but the smugglers told him later that he had made it to Lesbos. I have no idea whether this is true or not,” his son Khaled says by phone.

“My father is an old man, I never wanted him to make this journey. But there was no choice,” he adds, pointing to Danish asylum rules that do not allow parents to join their recently arrived children.

Khaled said he had had no contact with his father since August 20, the day of the crossing.

“He had his mobile phone on him and a list of our phone numbers on a piece of paper, so he would have called us if he could. “Maybe he lost the paper and the mobile phone in the water.”

Saskia Schwaiger, an Arabic-speaker who volunteers as an interpreter at one of Vienna's main train stations, said she had heard countless such stories.

A little Iraqi girl comes to mind, just four or five years old, who in the midst of telling her about their terrifying boat journey to Greece said: “Hussein fell in the water.”

I don't know who this Hussein was, but children are full of stories of these crossings,” she says.

Facebook pages set up by volunteers abound, all full of photos of missing people or separated family members that are shared far and wide.

“This kid have been in a Turkey police station for 40 days… Please Share,” one post reads, under a picture of a scared-looking little boy with bags under his eyes.

The Red Cross has a website called “Trace the Face”, which has published 354 shots of people looking for their missing relatives across Europe, and the International Organization for Migration has set up its own “Missing Migrants Project”.

For aid workers and volunteers, heart-warming tales of reuniting families are often darkened by the heart-breaking stories they come across.

Odde recalls visiting a prison in Greece earlier this month where unaccompanied children were transiting before being sent to shelters, two weeks after they landed in Crete.

Among them were two Syrian brothers aged around 10 and 14 who had lost their phone and their mother's contact details back home and had been unable to tell her they were all right.

He and the team handed them a tablet computer so they could get in touch via Facebook.

“When the Facebook page opened, they had broad smiles, but all of a sudden their faces crumbled and they started crying,” he says.

On the page were pictures of their older brother, covered in blood, and messages of condolences.

“It was him who sent them away so they could be safe,” Odde says.