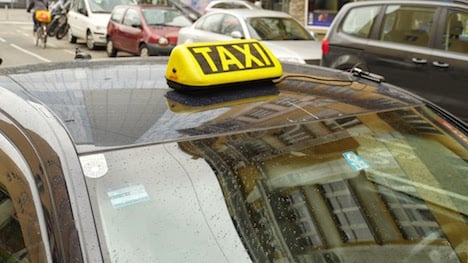 “I charge 150 euros to get to Vienna. It's a fixed rate no matter how many passengers there are,” the smiling, Austrian-born 30-year-old tells AFP as awaits his next customers. “I do two or three trips per day.”

“Before this all started, drivers would be lucky to earn 150 euros in a 12-hour shift in Vienna. I don't mind waiting sometimes five or six hours at a time because I know I will get a fare.”

Here at the Nickelsdorf crossing point, a long line of between 130 and 140 taxis snakes back from the border, waiting for the next train to disgorge its latest cargo of people on the Hungarian side, who then walk across.

“It's been like this for a month. Word has gone round by word of month, phone and Facebook (among all the taxi drivers). Now all of Vienna is here,” Mohammed quips as he enjoys a smoke.

Kevin, 23, is another contented taxi driver. He has a smart taxi van with eight seats, meaning he can charge more — 170 euros — for the 80-kilometre (50-mile) journey to one of Vienna's main train stations.

Unlike most of the others with Vienna number plates, Kevin is actually from Nickelsdorf. Before large numbers of migrants started arriving a few weeks ago, he only used to bother doing taxi work at weekends.

“I've been coming here for about three weeks and drive as much as possible,” he tells AFP through the window as he too passes the time smoking a cigarette. “Business is good… And I think it will continue for a while.”

Austria has long played host to refugees, whether they be Hungarians fleeing Soviet tanks in 1956, Czechoslovakians in 1968, Russian Jews in the 1970s, Iranians in the 1980s, East Germans in 1989 or Yugoslavians in the 1990s.

Apart from the Yugoslavians, the others mostly just transited through on their way elsewhere, and the current influx of migrants from the Middle East is for the most part no exception.

The tens of thousands passing through Nickelsdorf in recent months go on to Vienna and then get the train directly to Germany or go to Salzburg in the west and then walk five kilometres over the border into Bavaria.

The taxi drivers at Nickelsdorf — many of them, like Mohammed, sons (and sometimes daughters) of immigrants themselves — don't feel guilty that they are making money.

The taxi business has been tough for years in Vienna, and they have to live, they say. And besides, there is a free bus to Vienna if people can't afford a cab, and the new arrivals are aware of the price.

A notice board at the crossing — next to a sign in English and Arabic saying “Taxis — not free” — lists the prices of different destinations including 150 euros to Vienna.

“I don't think that's much,” Saeed, 23, a Syrian migrant wavering between joining the mass waiting for cabs, or holding on for a bus, tells AFP.

“They have money, these people are not poor,” says Mohammed.

“They can always pay for the taxi, no problem,” agrees Kevin.

They have to be careful, however, not to be tempted accept requests from a few of the migrants to drive them all the way to Germany, even though this may earn then upwards of 600 euros.

German police take a dim view of any taxi drivers doing so — two were arrested in Bavaria last week — seeing crossing the border as transgressing the line between taxi driver and people-smuggler.

“There are 4,000 people arriving in two hours. You are 100 percent sure to get a fare,” an organiser tells Mohammed as he walks past.

Mohammed smiles, and you can almost see the euro signs in his eyes.