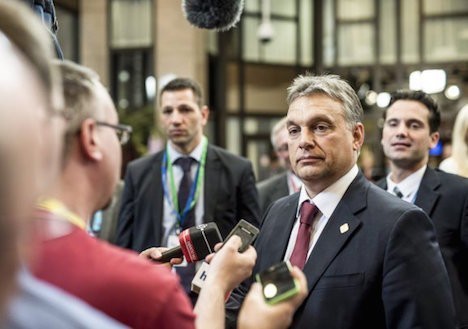 “The influx of migrants is not going to abate… We want to stop people crossing,” Orban told reporters in Vienna after a meeting aimed at smoothing over differences with Austrian Chancellor Werner Faymann.

“Introducing the border protection to Serbia has met expectations. Our duty is to make it happen on the Hungarian-Croatian border as well,” he said.

Orban said however that he would seek to secure international support before closing the border.

Hungary has seen more than 250,000 migrants enter the country this year, travelling up from Greece through the western Balkans and hoping to make it to northern Europe, in particular Germany and Sweden.

Tobias Plate, a spokesman for Germany's interior ministry, said Friday that it's estimated that “30 percent of asylum seekers claiming to be Syrian in the end aren't Syrian.” Refugees waiting to cross the border from Serbia into Croatia.  Photo: Joergen D.

On September 15 Hungary effectively sealed its Serbian border — the main route into Hungary — with razor wire and by barring the official crossing points.

This has since diverted 55,000 people in the past nine days into Croatia.

But Croatia, overwhelmed by the new arrivals, has been transferring them to its border with Hungary, which then transports them to the Austrian frontier.

Hungary has also begun closing off the 41-kilometre (25.5-mile) stretch of its border with Croatia not covered by the uncrossable Drava river.

At present, migrants are entering Hungary from Croatia via official border crossing points.

Hungary announced on Thursday that it has also started to roll out barbed wire along its border with Slovenia, the first such known measure between two members of Europe's passport-free Schengen zone.

According to Orban, the fence with Slovenia is temporary, and if necessary “can be cleaned up in a day”, he told reporters.

Meanwhile, Croatia reopened its border with Serbia after a dispute between the two countries over their respective migrant policies.

Croatian police said Friday the border is now open “to all traffic without restrictions.”

See this GALLERY OF REFUGEES CROSSING FROM SERBIA