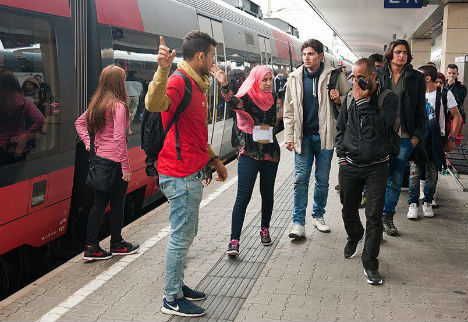 The route from Budapest via Salzburg, Austria to the southern German city of Munich has been taken by tens of thousands of refugees in recent weeks.

“As a result of administrative measures (border controls) the long-distance routes of Deutsche Bahn will be suspended, initially until October 4th, 2015, between Munich-Salzburg (Austria) and Budapest (Hungary),” Deutsche Bahn said in an online statement.

Overwhelmed by the record influx, and seeking to register the
asylum-seekers as they enter the country, Germany temporarily
reintroduced border controls on September 13th.

All regular passenger services have been cut between Salzburg and Munich, DB said, although passengers could travel via other routes to the Austrian capital Vienna.

“There will be no rail replacement service,” Austrian Railways spokesman Rene Zumtobel told the APA press agency. “Customers who wish to travel from Salzburg to Munich will have to take a bus or taxi to Freilassing.”

Trains from and to Innsbruck, Bregenz and Zürich will be running as normal.

This comes as Austrian officials say nearly 10,000 refugees arrived in Nickelsdorf on the Hungarian border on Monday. A police spokesman said most of the arrivals were taken to emergency shelters.

Refugees are continuing to cross into Austria from Hungary, even after Hungary sealed its southern borders to Hungary and Serbia. A train from Hungary carrying an estimated 1,000 people is expected on Tuesday. Many refugees arriving in Austria wish to continue their journey to Germany, via Salzburg.

EU interior ministers are meeting to try and resolve the dispute over how to re-locate the 120,000 refugees who have recently arrived in Europe.

The meeting comes ahead of an emergency meeting of EU leaders tomorrow.  A group of central European states – Hungary, Slovakia, the Czech Republic and Poland – are resisting calls for mandatory quotas.

Reports from Brussels say countries which refuse to take in refugees may face financial penalties, while those accepting refugees may receive €6,000 per person.