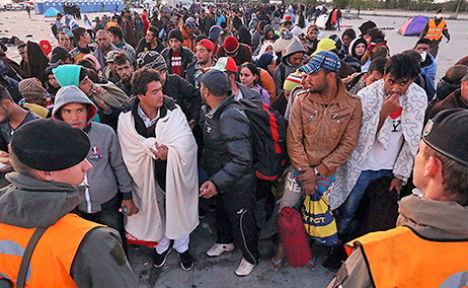 At the Austrian town of Nickelsdorf on the Hungarian border, some 7,000 refugees and migrants arrived on Sunday alone, a pile-up that caused long waits for onward transport. A snaking line of arrivals awaited buses, with others hoping for taxis to take them to Vienna.

“It's known that once you get to Austria, you've arrived,” said Saeed, a 23-year-old from Damascus who is hoping his odyssey will end in Germany.

“As we approach the Europe that we want, people are getting nicer and nicer.”

Budapest suddenly reopened the Horgos-Roszke 1 crossing on Sunday, the closure of which had added distance and uncertainty for those undertaking the gruelling journey across the Balkans into western Europe, with Croatia saying more than 25,000 had entered its territory since Wednesday.

Austria's Interior Minister Johanna Mikl-Leitner has said she will consider granting refugees temporary limited asylum status – although the majority of people arriving in Austria hope to continue on to Germany.

5,120 asylum applications have been made in Austria since the beginning of September. Applications have jumped to an average of around 300 per day since Germany reintroduced border controls.

Eastern European ministers are meeting on Monday to attempt to bridge stark differences over their refugee policies, as an escalating crisis saw thousands of migrants shunted from one border to another over the weekend.

Croatia said it could not cope with the huge influx and began redirecting migrants back towards Hungary or towards Slovenia, sparking angry reactions from both countries.

Both Zagreb and Budapest have stepped up efforts to move the huge crowds through and out of their territory as quickly as possible, with Croatia pushing a record 1,200 migrants onto neighbouring Hungary in the space of an hour on Sunday.

The right-wing government in Budapest has already built a razor-wire barrier along much of its border with Croatia, after sealing off its frontier with Serbia in a bid to keep migrants out.

The talks on Monday between the foreign ministers of the Czech Republic, Hungary, Poland, Slovakia, Romania and Latvia with their counterpart from Luxembourg, which currently holds the EU presidency, are aimed at addressing divides between neighbouring states.

EU interior ministers will also meet on Tuesday, in the hope that significant progress will be made by the time a bloc-wide emergency summit opens on Wednesday.

The continent's worst migration crisis since World War II has caused a deep rift between EU members over how to distribute the arrivals.

The massive influx has raised questions over the fate of the Schengen agreement allowing borderless travel across most countries within the 28-nation bloc, with several of them imposing border controls.

There are also bitter divisions over how to distribute the influx fairly between EU members, with several Eastern European countries staunchly opposed to plans for mandatory quotas of refugees.