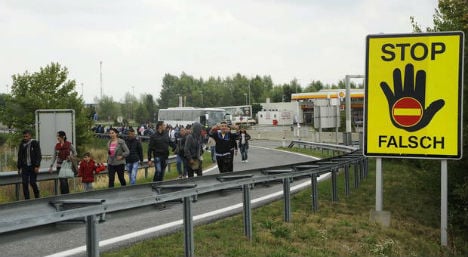 “We are expecting up to 10,000 refugees to arrive every day,” Manfred Komericky, Styria’s deputy police superintendent said. He said he was not sure when people would start arriving in large numbers, but that it could be soon.

He added that the Slovenian and Croatian authorities were being helpful and giving authorities in Austria “timely information” about the flow of migrants.

With Hungary's border shut, more and more refugees are heading towards Croatia, which is not in the Schengen zone and has said it is ready to receive refugees and will also allow them to travel on to northern Europe if they wish.

Austrian, Croatian and Slovenian officials are holding talks on Thursday to discuss in detail the passage of refugees into Austria.

Emergency accommodation for up to 4,000 people has been set up near to Spielfeld and Graz. Soldiers have been deployed to help police carry out checks on the main road from Slovenia and on trains.

In Burgenland, police are carrying out checks on the A4 motorway at the border points of Nickelsdorf, Deutschkreuz and Schachendorf. Their aim is to catch people smugglers who have charged refugees to take them across the border, but police said no refugees would be sent back to Hungary. So far the disruption to traffic has reportedly been minimal.

Carinthia is also preparing for a wave of refugees crossing its border with Slovenia and has said that any refugees arriving on foot will be directed to one of 12 reception centres where they can receive assistance and information.

On Wednesday evening 540 refugees arrived at the main train station in Klagenfurt, on special trains from Nickelsdorf, on the Hungarian border.

The majority of refugees who arrive in Austria want to continue their journey on to Germany.