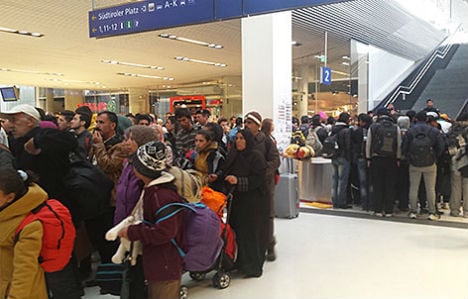 One day after Salzburg warned that the station might have to close due to the large numbers of migrants, government spokesman Johannes Greifeneder said the situation had “relaxed”.

“The situation was much more tense this morning. We informed people using flyers written in Arabic that there would be no train service to Germany,” he told AFP.

“We have offered shelter to people but they have refused,” he said. “My guess is that they will try to cross the border on foot.”

The situation escalated this week after Berlin reintroduced border controls at the weekend, temporarily suspending all trains between Austria and Germany.

Although an intermittent service has resumed, it has slowed the passage of thousands from Austria into Germany, causing major road and rail disruption.

Greifeneder said another train from Vienna was to arrive imminently, with another 250 migrants on board.

Late on Tuesday, the state of Salzburg warned that it could close the main train station as a safety measure due to the large numbers of people inside.

Hundreds of migrants were brought to the station on Tuesday afternoon in buses, cars and taxis, mostly from the eastern border with Hungary.

Tens of thousands have entered Austria from Hungary in recent weeks, all but a handful travelling onwards to Germany by train, and mostly to Munich via Salzburg.

But Germany's move to tighten its borders created something of a bottleneck, with around 20,000 migrants stuck in Austria on Monday.

On Tuesday, Austria also tightened checks at the Hungarian border.

Situated in western Austria, Salzburg is a popular tourist destination which is best known abroad for the Sound of Music film and for being Mozart's birthplace.