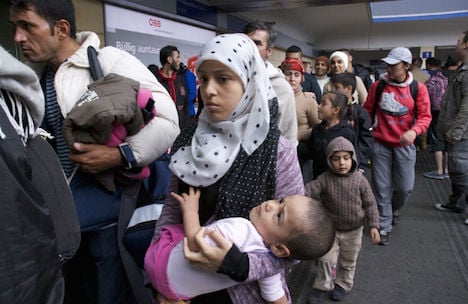 Stranded refugees are moved by police to temporary accommodation while they await news of the situation at the German border. Photo: Kim Traill

Far from Germany's cosmopolitan centres, Freilassing, population 16,000, is set in the mainly Catholic region known for its lederhosen, oompah music and the conservative politics of the beer garden.

“Many people in town — probably even most of them — are anxious about the unknown and all the changes this is bringing with it,” said Nadin Krosta, 32, a caregiver at a local hospital.

That's why she decided to lead by example as the provincial town suddenly got a crash course in globalisation this week, becoming a new entry point for people fleeing wars in Syria, Iraq and beyond.

Krosta brought her 12-year-old son Benni to help dozens of volunteers at the local railway station, now the first port of call for refugees after Germany reintroduced border controls Sunday.

As the boy gamely handed out water bottles to the new arrivals, a Syrian man missing a leg, 20-year-old Ibrahim, blew him kisses in gratitude.

“We wanted to set an example that if everyone helps out, we can manage it,” said Krosta.

Not everyone in Bavaria has been happy to see the state become the gateway for tens of thousands of refugees entering Europe's top economy.

State premier Horst Seehofer, head of the conservative CSU party, has led a rebellion against Chancellor Angela Merkel's decision to throw open the doors, warning of “an emergency situation we soon won't be able to control”.

His party's vice president, Hans-Peter Friedrich, went further, predicting “catastrophic consequences” and speculating about Islamic State jihadists who may be hiding among those fleeing war and misery.

Merkel has passionately fired back, telling her critics on Tuesday that “if we have to start apologising for showing a friendly face in an emergency, that's not my country.”

In Freilassing, many seemed to side with Merkel in the emotional debate.

Townspeople have brought donations to the railway station, welcoming migrants with a growing pile of bananas and pears, nappies and sanitary pads, fruit juices and water bottles, children's soccer shoes and winter boots.

One volunteer, Ralf Buchberger, 47, said he had already been handing out essentials at the railway station in the state capital Munich over the last two weeks, in scenes German media have dubbed a 'summer fairlytale'.

Then he saw that Freilassing needed his help more, said the digital marketing entrepreneur who helped organise the aid effort via local radio and Facebook.

Buchberger said his primary goal was to ease some of the refugees' fear and trauma.

“They hear helicopters overhead, had bad experiences with the authorities in other countries — we need to explain to them that the German police are different and that we're here to welcome them,” he said.

Ginger-haired Syrian Sherin Hisso, a 23-year-old budding journalist, stopped to pose for a selfie with six cousins from Kobane and her brother Shergo, 24, as they stepped off a train from Vienna.

Shedding a tear of relief, she smiled as she accepted offerings of fruit and water from volunteers.

“People here are so kind,” she said.

Not everyone was entirely convinced the influx is good news.

Gerlinde Hannappel, 74, said she was wary of trying to integrate people from a culture so foreign to her own.

“Muslims and Christians together? If it works, wonderful, but I expect it's even going to be difficult with the children in the schools, getting them to learn German,” said the retired paediatric nurse.

Nonetheless, Hannappel also said that seeing the war-scarred Syrians reminded her of her own horrific experiences as a child at the end of World War II, when her nearby hometown of Berchtesgaden — home of Hitler's Eagle's Nest retreat — was flattened by Allied bombing.

One man bridging the divide was Algerian national Hamza Makhzoum, 27, who has lived in the area since he married a local woman six years ago after they met on holiday in Tunisia.

Makhzoum says he plans to man the donations table every day after his training course as an elder care giver.

“I can help a little bit more than most because the refugees can relax when they hear I speak Arabic. They feel safer,” he said.

Buchberger said he was pleased to see many teenagers come out after school to join the volunteer effort.

“They are the new face of Germany,” he said.

“A hundred years ago this country brought the world down in rubble and ashes but now we are saying to the world, 'come here, you are welcome'.

“Germans see foreigners differently than they did even a few years ago.”