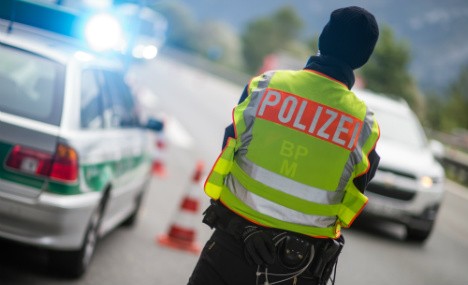 A police officer mans a checkpoint on the A8 highway between Salzburg, Austria, and Bavarian capital Munich on Monday. Photo: DPA

Two German police officers checked the identity papers of the steady stream of drivers and passengers on a bridge where the traffic bottle-necked into a single lane.

“It's like being back in the 1980s,” complained one of the drivers caught up in the snarl,  71-year-old German pensioner Helmut Zimmermann. “I would never have imagined such poor organisation.”

Chancellor Angela Merkel's spokesman said Monday that Germany was not slamming its doors to refugees but argued the measure was needed to restore order to the asylum process.

The two police officers were checking papers and radioing their colleagues further down the road which motorists to pull aside for closer questioning.

No refugees could be seen, either in vehicles or on foot, at the Freilassing border point.

Zimmermann said he had crossed the border from his small German hometown of Piding in the morning, only to be caught up in the wait on the way back.

“I always drive across to Austria to buy cigarettes and fill up on petrol,” because of the lower prices, he told AFP.

He welcomed the new controls, but not the way they were being carried out, grumbling that “it couldn't possibly work smoothly with just two police officers on that bridge”.

“I can't understand why they're doing it this way,” he said, having already waited for 45 minutes.

He also doubted the effort would work, pointing to what he called the “green border” of open fields and forests all around.

“For that, the 'green border' is far too porous,” he said.

“In the past few days people have crossed here again and again. Just a few days ago my wife saw a few dark-skinned people come out of the forest.”

Also caught up in the traffic jam was Rudolf Windhofer, a 56-year-old taxi driver from the Austrian city of Salzburg, who was taking students across the border to Bavaria state.

“I've never waited this long, I've never seen anything like it,” he complained.

Having regularly driven the route for 12 years, he said, he was now losing money.

“During the extra time I need here I can't take any other fares, and the students are all going to be late,” he said.

The police at the crossing, meanwhile, said the effort hadn't yet netted any people traffickers, after several were arrested the previous day.

“We haven't seen any smugglers for hours,” said one of the officers, declining to give his name.

“They would be pretty stupid to still be arriving now. They would get a free one-way trip to prison”.

On their car radios, meanwhile, motorists heard traffic alerts about more choked-up border points, and a warning from Bavaria's interior minister Joachim Herrmann that the restrictions would likely stay in place “at least several weeks”.

With many trucks caught up in the delays, the road transport industry voiced concern about the traffic restrictions at busy thoroughfares at the heart of Europe.

“We are concerned,” said Sebastian Lechner, managing director of the Association of Bavarian transport and logistics companies.

He added that “in the medium and long term we will no longer be able to ensure punctual services”, warning of “significant delays”.

Freight rates could also go up, warned the German federation of transport and logistics firms DSLV.

“When a truck driver is stuck in traffic jams, it's paid work time” which would feed into the overall transport costs, it said.

“If these border controls go on for several weeks, or even longer, the sector would have to discuss a possible adjustment in prices with their clients,” it added.