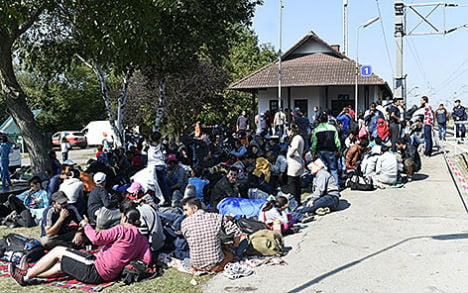 “The police and the Austrian interior ministry need support, they need support from the Austrian army,” Chancellor Werner Faymann said in Vienna a day after Germany reintroduced border controls for migrants, leaving thousands of people effectively stranded in Austria.

“The main focus of the support will be in domestic humanitarian help, but it will also assist in a strengthening of border controls where necessary,” Faymann told reporters.

Faymann said that the decisions are “a clear signal (to the international community) that Austria and Germany cannot solve the world's asylum question alone.”

Meanwhile, the Austrian-Hungarian border crossing at Nickelsdorf on the A4 motorway has been temporarily closed, as Austrian police expect a large influx of refugees from Hungary and have said the situation could escalate to an emergency.

More than 16,000 people have crossed the border from Hungary since Saturday afternoon. Police spokesman Gerald Koller said that up to 10,000 refugees are expected to arrive in Heiligenkreuz in Burgenland on Monday, and that they do not have the resources to cope with such a large number.

Police have set up metal barriers to contain the refugees, who are arriving on buses every hour. Around 7,500 refugees are in Nickelsdorf, waiting to travel on to Vienna.

More than 5,000 refugees spent Sunday night in Vienna, police spokesman Patrick Maierhofer said. Around 1,100 refugees were reported to be at Westbahnhof station on Monday morning. During the last 24 hours 131 people have filed asylum applications in Vienna.

There are unconfirmed reports that Hungary is about to close a refugee camp at Röszke, where up to 80,000 people are currently being held. The camp is 386 km from Austria and there are fears that the refugees will set off on foot for Austria.

People wishing to travel from Austria to Hungary on Monday are advised to use the border crossing on the A6 motorway, by way of Kittsee or Deutschkreutz.

Train services between Austria and Germany resumed on Monday morning, after being suspended for 12 hours on Sunday.

In recent weeks, tens of thousands of migrants have travelled up the western Balkans from Greece into Hungary and then Austria, all but a handful continuing to Germany — which has relaxed asylum rules for Syrians — and also Sweden.