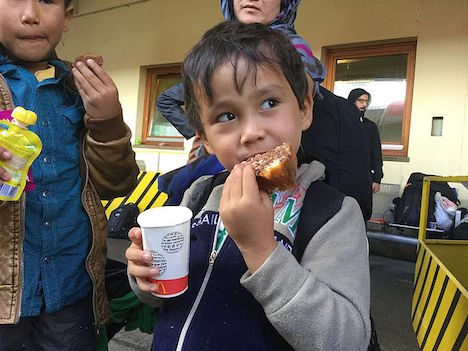 The Bild newspaper reports that the German interior minister made a statement on Sunday, explaining that a temporary introduction of border controls is necessary to stem the massive influx of refugees trying to cross from Austria.

A similar move to suspend unrestricted movement was also announced by the Czech Republic on Sunday evening.

German officers began carrying out the first passport checks at the country's border with Austria, after Berlin's shock decision to reintroduce such controls to halt a surge in refugee numbers, an AFP journalist witnessed Sunday.

Three Syrian migrants were stopped at the Freilassing crossing and told to remain on the side of the road in the Bavarian commune close to Austria's Salzburg, after German officers looked at their papers.

“We want to go to Germany,” one of the three told AFP.

The border crossing at the Bavarian commune is a key road crossing for travellers between the Salzburg region and the southern German region of Bavaria.

German federal police had said hundreds of officers were being deployed to carry out the newly reintroduced border controls.

Additionally, Austrian railways said that they have suspended all trains to Germany at the request of the German railway company.  The suspension is expected to last for 12 hours.

The move came in the wake of calls for help from federal police in the German state of Bavaria, which represents one of the first German transit points for the arrival of refugees from Syria and other countries.

German Interior Minister Thomas de Maiziere made a statement on the refugee situation late on Sunday afternoon.  The decision was made in a telephone conversation between German Chancellor Angela Merkel and her Austrian counterpart Werner Faymann, when the two leaders spoke about a “gradual return” to regular border controls, Austrian news agency APA reported, quoting a spokeswoman at Faymann's office.

The change would be carried out in a manner to avoid any “chaotic situation” at the border, she added.

According to Austrian police, more than 6,000 refugees entered Austria since midnight, with numbers for the day expected to exceed 10,000.   Most of the refugees plan to move on to Germany or Sweden, according to police reports.

Passport checks had been abolished for countries within Europe's Schengen zone, but the decision to bring back controls was announced by de Maiziere at a press conference on Sunday evening, several German media reports said.

Germany has become the destination of choice for migrants, particularly Syrians, after Chancellor Angela Merkel relaxed asylum rules for citizens of the war-torn country.

But with 450,000 migrants arriving since the beginning of the year, infrastructure in Germany is being stretched to the limit.

By reinstating controls, Berlin is seeking to buy time to cope with the influx, according to news magazine the Spiegel.

“That includes help for countries from where refugees are fleeing and also includes an effective control of our own borders which also no longer works given the EU's complete failure to protect its external borders,” he said.

'Germany has reached its limit'

The minister on Sunday said that Germany has 'reached its limit,' as he called for measures to halt a record migrant influx that has seen the infrastructure of the southern city of Munich buckling.

Dobrindt, who is a member of the Chancellor Angela Merkel's conservative Bavarian allies CSU, warned that the country “has reached its limit of capacity”, a day after 12,200 more refugees reached Munich — a key arrival point.

Police warned on Sunday that Munich is at the limit of its capacity to welcome refugees arriving en masse.

“We had a total of 12,200 refugees on Saturday… today we're expecting several hundreds. Given the numbers from yesterday, it is very clear that we have reached the upper limit of our capacity,” said a police spokesman.

“Our aim today would be to transport as many as possible out of here, to make place for new arrivals,” he said.

Munich has become a key arrivals point for refugees travelling to Germany by train through Hungary and Austria.

The president of the Upper Bavaria region, Christoph Hillenbrand said he did not know “how we can cope”, according to the Bild am Sonntag tabloid which headlined its article “Munich at the brink of collapse”.

Bavarian public television BR said the city “came very close to a humanitarian disaster”, although authorities managed to limit the numbers of people sleeping on mattresses on the floor to just a few dozens, rather than the hundreds as earlier feared.

Authorities are mulling whether to open up the Olympiahalle — a stadium used for the 1972 Olympics and which today serves as a concert hall or sports arena — as a temporary shelter for the refugees.

As Germany buckles under the strain of the record refugee influx expected to reach 800,000 this year, dissenting voices from the CSU have grown louder.

The Czech Republic said Sunday it will boost controls on its border with Austria over the refugee crisis, following a similar move by Germany.

“The Czech Republic is boosting measures on its border with Austria. Further steps will be determined according to the number of refugees heading to the Czech Republic,” Interior Minister Milan Chovanec told public Czech Television.

Czech Prime Minister Bohuslav Sobotka said in a statement that Germany's decision “could be expected… as a reaction to tensions inside the Schengen area caused by the migrant crisis.”

“The EU was not able to thoroughly observe its own rules when handling the migrant crisis and efficiently protect the outer border of the Schengen area,” said Sobotka.

“So now it is necessary to take operational steps to boost the security of individual countries and contain the inflow of refugees.”

He said the EU should better regulate the inflow of migrants on its outer borders and “ensure dignified conditions for asylum seekers and distinguish war refugees from economic migrants”.

The Czech Republic has been a transit country for migrants travelling to wealthier EU states like neighbouring Germany and registers only dozens of asylum requests within the current refugee wave.

Like other ex-Communist EU members in central Europe including Hungary, Poland and Slovakia, the Czech Republic has vehemently opposed refugee redistribution under a compulsory quota system drawn up by the European Commission and pushed by EU powerhouse Germany.

Sobotka said earlier on Sunday the quota system “won't work” as migrants will want to continue to Germany or Sweden instead of staying in the poorer central European countries.