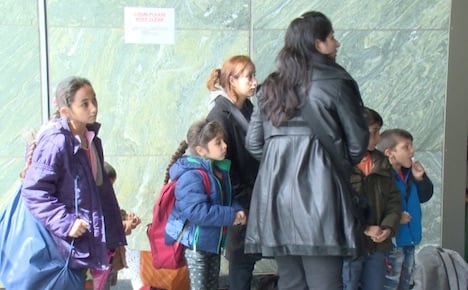 Dozens of events are planned with the biggest likely in London but there are also rival anti-migrant rallies expected, notably in eastern European countries that are resisting pressure to take in more of the refugees.

“It's time to speak out against the deadly borders that have been enacted in our name. People all over Europe are organising resistance and solidarity in their towns and cities,” organisers of the “#EuropeSaysWelcome” initiative said on social media.

“We want to let all the refugees know: You are welcome!”

The International Organization for Migration said Friday that more than 430,000 people have crossed the Mediterranean to Europe this year, with 2,748 dying or going missing in packed and unseaworthy boats operated by often unscrupulous human traffickers.

The influx has exposed deep rifts with the European Union, with “frontline” states Italy, Greece and Hungary struggling to cope and European Commission proposals for sharing 160,000 of the new arrivals in a quota scheme facing resistance among eastern members.

Germany has absorbed the lion's share so far, taking in 450,000 people and the government of Chancellor Angela Merkel — hailed as a heroine by many migrants but under fire even from allies at home — relaxing asylum rules for Syrians.

On Friday, Berlin's foreign minister pressed his eastern European counterparts in Prague to do more, saying the crisis could be “the biggest challenge for the EU in its history”.

But his appeal fell on deaf ears, with Slovakian Foreign Minister Miroslav Lajcak saying he wanted a solution “that is not imposed” but “made jointly”.

“Migrants don't want to stay in Slovakia,” he added bluntly.

Denmark's right-wing government also said it would not take part in the quota scheme.

Like Britain and Ireland, the Scandinavian country has an opt-out on the 28-nation EU's asylum policies.

Hungary, meanwhile, has seen some 175,000 people travel up from Greece across its borders this year. Its plans to build a large fence, deploy the army and jail immigrants have earned it stiff criticism, stoked by images of migrants in packed camps.

Austrian Chancellor Werner Faymann, whose country has seen thousands of migrants enter from Hungary in recent days, with all but a few passing through, was quoted Saturday as comparing Hungary's treatment of migrants to the Nazi era.

“Piling refugees on trains in the hopes that they go far, far away brings back memories of the darkest period of our continent,” Faymann told German weekly Spiegel.

But on Friday, Prime Minister Viktor Orban launched his own broadside, saying Europe's leaders are “living in a dream world” with “no clue” about the dangers and scale of the problem, while denying that the migrants are, strictly speaking, refugees.

“These migrants are not coming our way from war zones but from camps in Syria's neighbours: from Lebanon, Jordan and Turkey… So these people are not fleeing danger and don't need to be scared for their lives,” Orban told Germany's Bild daily in an interview.

Orban said he would propose to his EU counterparts that the bloc provides three billion euros ($3.4 billion) to Lebanon, Jordan and Turkey, “and more if necessary — until the flow of migrants is stopped.”

The idea that quotas would work is an “illusion,” he said. “(Can) we really stop the migrants going where they want? Who is going to keep them in Estonia, Slovenia or Portugal if they want to go to Germany?”

Thousands more were meanwhile travelling up from Greece through the Balkans. According to one UN official, a record 7,600 entered Macedonia overnight Thursday to Friday, bound for Serbia and then Hungary.

New figures Saturday showed that 3,023 people entered Hungary on Friday, all seeking to travel — via Austria, despite it having suspended train services to Hungary — to countries in western Europe, particularly Germany and Sweden.

Nearly 6,000 arrived in the southern German city of Munich. Germany has placed 4,000 troops on standby for this weekend alone to cope with the influx.

At the flashpoint Hungarian border crossing point of Roszke, dozens of Afghans on Friday night lay down in front of buses, refusing to be taken for police registration out of fear they would have to stay in Hungary, an AFP reporter said.

A huge operation has sprung up around the border zone, as NGOs, charities and doctors have set up a messy but well-stocked camp for the thousands crossing into Hungary every day.

It is still not enough, however.

“We're overwhelmed. We just can't get ahead of it,” said Mark Wade, a British volunteer.

Earlier he helped carry a 12-year-old Syrian girl who had walked several miles with a grotesquely swollen knee broken after she was hit by a taxi.

“At first I thought there was something wrong with her face, but it was just the agony from her knee,” said Wade.

“I had to take 20 minutes off after that one, just to get myself together again.”

People wishing to financially assist refugees to travel to Germany should visit this crowd funding platform.