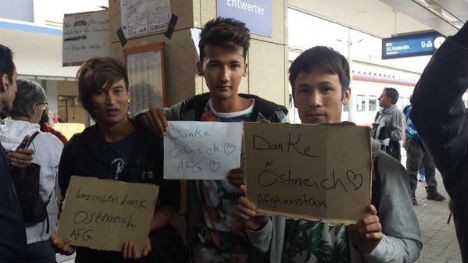 We reproduce the full text of the report below.  These claims have not yet been validated by The Local, but are reported as unsubstantiated.

We generally do not post, or approve posts, of news articles. However this article (translated from the Hungarian, below) contains information that may be of vital importance to those in transit and for those working on the ground in Hungary and in Serbia, and for those en route to these countries, especially in the border areas.

To our knowledge this information is not being reported in as much detail in the English-language press. Please take a moment to read this if you are in any way involved in these areas or with these communities, and please share widely.

Thanks so much for translating this from Hungarian, and for making it public, Nora Ganescu:

“As of next Tuesday, the authorities in Hungary will adopt a completely different approach to the refugees.

Those who enter illegally, will be captured, jailed and quickly expelled from the country

Those who submit an application for asylum legally, can not even enter the territory of Hungary and will be returned to Serbia within few hours. The government in the coming weeks is preparing for crowd dispensing scenes, but Orbán said that this is the only way to have relative calm by Christmas.

Viktor Orban and Janos Lazar mentioned several times that from September 15 onwards (i.e. next Tuesday) a new era will begin in the treatment of refugee situation, because this is when the new legislative amendments to the refugee law will enter into force.

These are not simple technical changes

The authorities, the police, the immigration office, the courts get new instruments and obligations, that force them to deal with the refugees crossing the border in a completely different manner.

For example, the outbreaks we saw in Röszke (refugee collection point and camp) on Monday and Tuesday would be met with a completely different response by the police.

Government sources mentioned several tangible, concrete examples, of what will this new “era” entail. Important changes include the creation of so-called transit zone. Imagine the transit zone like an U-shaped area, that is open to the Serbian border but closed to Hungary.

Because of these areas, the border strip will be widened to 60 meters. An important new feature is that this transit area does not qualify as Hungarian (or EU) territory. It will be like the transit zone in the international airport.

The immigrants in the transit zones may submit their applications for asylum, legally the only way to get into the EU.

Péter Szijjártó Foreign Economic Relations and Foreign Minister had earlier said that three of those transit zone will also be constructed on the Serbian border.

By law, the administration of asylum applications will be dealt with within eight days. (According to the European rules in this time a refugee can move freely within the EU).

Here however, the only ones who will be allowed to enter Hungary will be those who receive the refugee status.

This government has a tricky answer

According to a member of the government, the authority will be asked to not delay the answer to the refugee request for several days, but give a decision within 2-3 hours. These decisions almost invariably will be dismissive, as since summer the government declared Serbia a safe country.

This will leave the refugees arriving to the Hungarian border with no choice than returning to Serbia (from the closed transit zone).

Illegal border crossers will be expelled.

Of course one can also try to enter the country illegally as thousands of people are doing now. However, as of September 15, this will not only be an offense, but also – in the amended Criminal Code – a crime. According to our sources, the police will not take the refugees to a registration point (as they are doing now) but take them in custody and send them to court.

Then, they will be either expelled or sent to prison.

This is precisely the reason why Viktor Orban urges the building of the fence, as this is the only way to to ensure that the mass of refugees will go into the transit zone, and do not walk through the green border.

So it won't make a difference if the refugee wants to enter the Hungarian territory legally or illegally, they will almost certainly be deported.

But what if they are trying to break through en masse?

It may well be, of course, the massive rejection of applications will create outrage and groups of refugees will rebel and try to break through the territory of Hungary.

A member of the Government said that the government expects and is prepared to break such attempts.

They have therefore ensured that the army is deployed at the border. (The parliament will vote for the required change in the law on the 21 September – it will take two thirds of the parliament to vote for that).

The protection of the border will still be made by the police, but beyond every policemen there should be 2-3 soldiers.

The soldiers and police officers will not have fire command, the police will use already existing instruments to disperse the crowds: water cannons, tear gas, batons.

A government source said they expect more such “dispersing scenes” in the coming weeks.

Where does this strict action lead?

The government estimates that the crackdown will have two consequences:

1. The people smugglers and refugees realize that the can't get to the EU through Hungary: they need to find another way.

2. Serbia will also change its attitude, and not facilitate the smooth transit of the people through it's territory. After all, tens of thousands jammed the Hungarian border with Serbia can cause serious problems.

According to the Hungarian government plans the great influx of refugees to the Serbian-Hungarian border will come to an end by Christmas.

However it is naive to think that the refugees and people smugglers will not look for other avenues. The government thinks one possible scenario is towards Croatia (Romania also possible, but less likely, as it represents a huge detour to Germany).

According to the government's calculation the rivers in the Croatian-Hungarian border, Drava and Mura will deter refugees and people smugglers to take the direction towards Hungary, leaving the way through Slovenia, which is no longer the concern of the Hungarian government. If they refugees wanted to come en masse from Romania or Croatia, the government did not rule out building there a fence, too. (no decision yet about this).

According to a government member we should prepare for “disturbing pictures” as of next Tuesday on the Serbian border.”