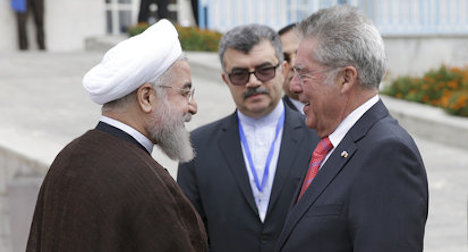 “Is it a priority to discuss democracy in Syria today?” Rouhani asked at a news conference with visiting Austrian President Heinz Fischer.

“Is it a priority to talk about the opposition and (government) supporters, or reforming the Syrian constitution?”

Iran provides financial and military support to Syria and has military advisers on the ground there.

Rouhani said on Tuesday Syria was in “complete instability” with “millions of people displaced and hundreds of thousands killed”.

What mattered to Tehran was saving the “lives of the Syrian people” and “the return home of refugees”, he added.

“The first step is to stop the bloodshed, to establish relative security in Syria and the refugees can go home,” said Rouhani, insisting that starting with a “wrong first step” would mean failure.

“Then we can talk about Syria's future, opposition groups, democracy and elections,” he said.

Rouhani stressed that Iran was ready to “sit down at any negotiating table anywhere in the world” to help stop the violence and establish peace in Syria.

More than 240,000 people have been killed in the conflict, which began with anti-government protests in March 2011 but spiralled into a complex civil war after a government crackdown.

Since 2013, Sunni jihadists including Al-Qaeda affiliate Al-Nusra Front and the Islamic State group have seized large swathes of land in Syria and Iraq, Iran's other Shiite ally.

Austrian President Heinz Fischer said Tuesday his country wanted to boost trade with Iran as its nuclear deal with the West opened a “new chapter” in ties with other countries.

Fischer, the first European head of state to visit Iran since 2004, told a news conference in Tehran he hoped “the volume of trade would reach 300  million euros by the end of the year”.

Austria is a neutral country that has always maintained good relations with the Islamic republic.

According to the Austrian Economic Chambers, Vienna is hoping for a five-fold increase in trade with Iran in the medium term to reach more than one billion euros.

Fischer, who was accompanied to Iran by several government and a large business delegation, said in a commentary published in the Tehran Times newspaper that areas of cooperation include “energy, environmental technology, tourism, infrastructure, forestry and civil protection”.

The nuclear deal between Iran and Britain, China, France, Germany, Russia and the United States aims to curb Tehran's nuclear drive in exchange for a gradual lifting of sanctions imposed on its economy since 2006.

The lifting of sanctions, expected from 2016, is expected to return much-awaited foreign investment to Iran, a country rich with oil and gas resources and a population of almost 80 million.