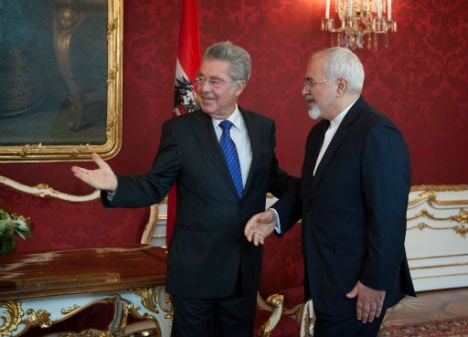 He told a news conference that bilateral trade with Iran is expected to grow to €300 million by the end of this year, and that his country wants to boost trade with Iran as its nuclear deal with the West opened a “new chapter” in ties with other countries.

Fischer is the first European head of state to visit Iran since 2004. Austria is a neutral country that has always maintained good relations with the Islamic republic.

According to the Austrian Economic Chambers, Vienna is hoping for a five-fold increase in trade with Iran in the medium term to reach more than one billion euros.

Meanwhile, Stop the Bomb, an organization that was founded in Austria in 2007 and that opposes the Iranian government, has slammed Fischer for travelling to Iran. In particular it criticised his planned meeting with Supreme Leader Ali Khamenei on Tuesday – a rare event for a visiting non-Muslim dignitary.

Writing on Sunday on the Iran Daily website, Fischer avoided the issue of Iran’s human rights record. “Austria is a land of dialogue. We reject violence. We want to build bridges and want to seize every opportunity to reduce tensions and promote a climate that promises a better future than if we remain stuck in confrontation,” he said.

However, in an interview with public broadcaster ORF he said that he would bring up Iran’s human rights record during his three day trip.

“The Supreme Leader Ali Khamenei, whose hand Fischer will shake… openly threatens to this day the Jewish state with destruction and denies the Holocaust,” said Stop the Bomb official Stephan Grigat. He said the trip would legitimize Tehran’s policies.

“If Fischer really wanted to help improve the situation in Iran, he could anytime officially invite exiled Iranian dissidents to his office in Vienna,” he added.

Fisher’s visit follows the signing of a landmark deal between Iran and world powers on its disputed nuclear program. He is accompanied by a 240-person delegation of business executives, from Austrian companies including Andritz, OMV, Lenzing, Raiffeisen and Erste Bank.

Austria and Iran have signed four memorandums of understanding on environmental, economic, and political cooperations and interreligious dialogue.