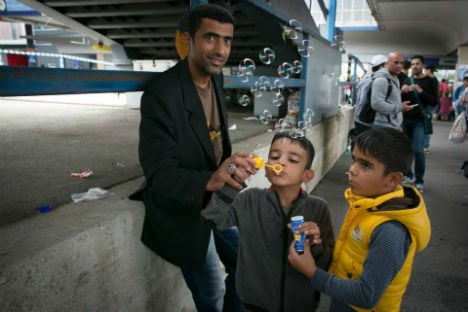 He said they would move step by step “towards normality”, after speaking to German Chancellor Angela Merkel and the Hungarian Prime Minister Viktor Orban on Sunday.

Faymann added that “a measure of this type cannot be a solution” and that Austria would slowly reintroduce random border checks.

Hungary had previously blocked refugees from travelling to Western Europe, but on Friday announced it would be shuttling people to the Austrian border.

On Sunday, a group of cars driven by German and Austrian activists travelled to the Hungarian border to pick up refugees and distribute food and blankets.

The refugees had travelled north through the Balkans before arriving at Hungary's southern border, and on to Austria and Germany. The majority are fleeing the civil war in Syria.

Just over 100 people claimed asylum in Austria over the weekend, with more than 18,000 travelling on to Germany to claim asylum there. The refugees are afraid that if they claim asylum in Austria they could be sent back to Hungary under the Dublin III rule – whereas Germany has said it will accept asylum applications from Syrian refugees, regardless of which EU country they first arrived in.

The new arrivals in Austria have been met at the main railway stations – Westbahnhof and Hauptbahnhof – by a huge army of charity workers and volunteers who are handing out food, water, hygiene supplies and providing medical treatment.

Germany is expecting a record 800,000 new asylum seekers this year, four times the number in 2014.

The UN's refugee chief has said the crisis could be “manageable” if European countries all pulled their weight and agreed on a common approach.

European Commission President Jean-Claude Juncker is expected to present a plan on Wednesday to relocate 120,000 refugees from overstretched Italy, Greece and Hungary.

Germany's Welt am Sonntag newspaper said the plan would see Germany accepting 31,000, followed by France with 24,000 and Spain with almost 15,000. Austria has said it will take an extra 3,640 refugees.

EU interior ministers are meeting on September 14th, and Austria is among those pushing for a summit to resolve the migrant crisis to be held swiftly afterwards.