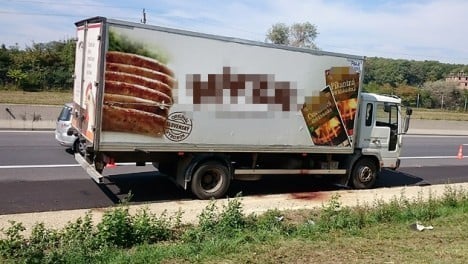 Preliminary autopsy results indicate that “if you take into account the number of people and lack of oxygen, it's fair to assume that asphyxiation occurred within no time at all,” police spokesman Hans Peter Doskozil told a press conference. An investigation of the truck has revealed that it was airtight.

The final coroner's report was expected to take another five or six weeks, Doskozil added.

Among the dead were Syrians, Iraqis and Afghans. 17 travel documents were found with the bodies. Police are still working on identifying all of the bodies.

The 59 men, eight women and four children were discovered piled on top of each other in the back of a refrigerated poultry truck in a motorway layby near the Hungarian border on August 27th.

Six men suspected of organising and driving the truck have been arrested – five Bulgarians and an Afghan.

Two Austrian detectives are currently in Hungary, joining investigations there and questioning suspects.

Doskozil said that the refugees boarded the truck on August 26th at around 5pm, on the Hungarian-Serbian border. The vehicle drove onto the M5 motorway and continued on the M1 towards the Austrian border. It crossed the border at Nickelsdorf at around 10pm and was later found abandoned in a layby at Parndorf.

It was discovered the next day by employees of the Austrian motorway operator ASFINAG, who noticed decomposing body fluids dripping from the vehicle.

One of the suspected drivers, 32-year-old Tsvetan Tsvetanov, denied knowing there had been anyone on board the lorry, during his first appearance in a Bulgarian court on Thursday.

Charges against him include “participation in an organised crime group, contraband trafficking and premeditated manslaughter of 71 people”.

Police believe Tsvetanov and the other five – who were arrested in Hungary – are low-ranking members of one of the numerous people-trafficking gangs that extract large amounts of money from migrants to help them reach Europe.

The migrants' deaths led to a security crackdown in Austria and massive tailbacks formed on the border with Hungary earlier this week, as officers inspected vehicles in search of people-smugglers and refugees.

During their investigation police discovered another 81 people who were hidden inside the back of a similar refrigerator truck on August 27th on the A4, Doskozil said. The refugees had managed to prize the back door of the truck slightly open with a crowbar, so that they could breathe. The driver of the truck abandoned them in Gols.