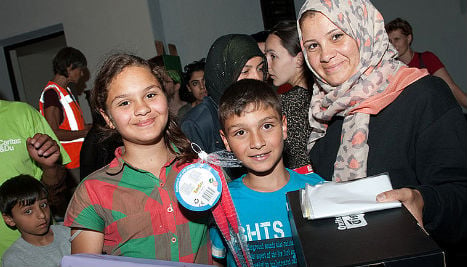 As large numbers of volunteers welcomed refugees and migrants arriving at Westbahnhof on trains from Hungary this week with bottles of water and food, the city's refugee coordinator says there have been over 1000 offers to help.

Around 3,650 refugees and migrants arrived in Vienna on Monday, the largest number to ever arrive in Austria in one day, after authorities in Budapest allowed people who had been camping outside the station for days to board the train.

The NGO Caritas was overseeing the distribution of donations on Tuesday, the numbers of which had reportedly been overwhelming, and said by the afternoon no more were needed.

“Something is happening in the city,” says refugee coordinator Peter Hacker, who runs the platform “fluechtlinge.wien” where people are lodging their offers of time and money.

“There were hundreds of letters arriving from members of the public who wanted to support and encourage refugee policy in the city.”

The platform, which was only launched online in August, has since received 1,200 offers from volunteers wanting to dedicate some time to helping the hundreds of thousands of people fleeing conflict and poverty in the Middle East and Africa.

“Everything helps, even if it is only two hours in the week,” Hacker said, adding that their offers of help were directed on to different organisations working in this area.

The platform brings together different areas of refugee aid, from volunteering time to accommodation places. There have been around 100 offers of space in apartments for people to sleep, which experts are examining at the moment.

“This ranges from a single place in a shared apartment to a complete place,” Hacker said, who could not confirm yet how many would turn into actual accommodation places for refugees.

20,000 protest against treatment of refugees

He was speaking following a larger-than-expected demonstration of 20,000 people that took place in Vienna on Monday in support of refugees.

Many protesters were welcoming refugees and calling for a more humanitarian approach to migrant policy.

The protest was organised after the grim discovery of the bodies of 71 refugees, including four children, were found in an abandoned truck in Austria last week, having suffocated while being smuggled into Europe.

Interested in volunteering your time or money? The Local Austria featured an article in August outlining four ways people can help refugees in Austria.