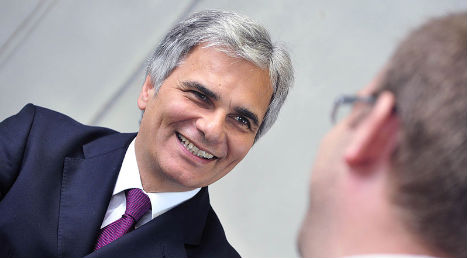 Speaking on the ORF's 'Sommergespräch' programme, the chairman of the Social Democratic Party of Austria (SPÖ) said the accommodation and distribution of asylum seekers was the most important question in Europe today.

Calling for more pressure on countries such as Great Britain, Poland and Czech Republic who have taken fewer numbers of refugees comparatively, he warned that “solidarity is not a one way street”.

“Countries that are pushing away responsibility must know that will not do,” he said. “The EU financial framework is being negotiated again and these countries will need something from us. We are a cosmopolitan European country and we stand by our international commitments. We want to be involved but we also demand solidarity.”

He added that the Hungarian approach of building a fence is not the right solution.

He said: “To think that you can solve something with a fence, I believe this is wrong. It is a matter of protecting the foreign borders and eradicating the reasons for fleeing. Nobody wants everybody to erect a fence. It would not succeed against the smugglers, destroy Schengen and smash our common EU.”

Meanwhile, the Chairman of the right-wing Freedom Party (FPÖ) Heinz-Christian Strache has said that border fences are “of course” necessary for tackling smugglers.

Responding to a question from the 'Oberösterreichischen Nachrichten' newspaper asking if he would be for barbed wire fences like those built by Hungary on their border with Serbia he said:

“Of course it is necessary aside from border crossings to protect the country with fences so that the illegal smuggling Mafia can not pursue their murdering businesses.”

Thousands of refugees arrive in Vienna

The statements came amid chaos on Monday when around 3,650 refugees arrived at Vienna's main stations on trains from Hungary where they had stormed carriages after authorities had lifted security at the Budapest central station.

Many of the migrants slept at Vienna's Westbahnhof station, hoping to continue their journey on to Germany, which last week eased asylum restrictions for Syrian refugees.

Meanwhile in the city of Vienna, 20,000 people protested in support of refugees and calling for a more human rights approach to the crisis, rather than one that focuses on border controls and tackling smugglers.