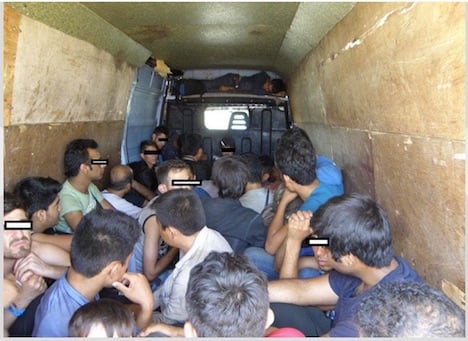 Hungarian police said a fifth suspected human trafficker — a fourth Bulgarian — had been arrested over Thursday's gruesome discovery of 71 decomposing corpses in an abandoned truck on an Austrian motorway.

The truck tragedy, plus yet another Mediterranean shipwreck claiming at least 111 lives, have served as chilling reminders of Europe's failure to cope with the influx of hundreds of thousands of migrants.

The United Nations estimates 300,000 people have fled conflict and hardship in the Middle East and Africa for a better life in Europe this year alone. Millions more sit in camps in Turkey, Jordan and Lebanon.

Some 2,500 have died in the treacherous journey, most drowning in the waters of the Mediterranean after being crammed into unseaworthy boats.

European Union home affairs ministers are to hold emergency talks on September 14 in Brussels to try and “strengthen the European response,” the government of Luxembourg, which holds the rotating EU presidency, announced Sunday.

French Prime Minister Manuel Valls said that people “fleeing war, persecution, torture, oppression, must be welcomed” and should be treated with “dignity”.

Pope Francis meanwhile called for “effective cooperation” against “crimes that are an offence to the whole of humanity.”

'Peace be with you'

The migrants crossing the Mediterranean head either for Italy — where another 513 arrived on Sunday, adding to some 108,000 this year — or Greece, which many also reach overland via Turkey.

Lots then try to come north, in the case of Greece trekking up through the western Balkans — Macedonia called a state of emergency two weeks ago — bound for EU member Hungary.

The journey is exhausting — and expensive.

“We can't afford this at all, and every step of the way we have to pay,” Samar, a 40-year-old from Damascus, told AFP as she waited in the sun for hours at a filthy reception camp in Presevo, Serbia.

“We are in a labyrinth, going from queue to queue, and here in Serbia, the police are shouting at us like we are animals,” the mother of two teenage boys said, tears welling in her eyes.

Hungary, which this month has recorded 50,000 new arrivals, has responded by completing on Saturday a barrier of three rolls of NATO-standard razor wire along the entire 175-kilometre (110-mile) border with Serbia, patrolled by border police with dogs and 4x4s.

Fabius said Sunday that the barrier “did not respect Europe's common values”.

It is not proving much use in any case, with police saying Sunday that 3,080 migrants crossed over on Saturday, the second-highest daily total.

On Sunday AFP witnessed a group of around 200 migrants passing through carrying plastic bags, rucksacks and bottles of water. They called out a greeting, “salam alaikum” — “peace be with you” in Arabic.

The five people now in custody in Hungary over the Austrian lorry are believed by police to be low-ranking members of one of the numerous and often unscrupulous human-trafficking gangs that extract exorbitant amounts of money to transport migrants.

The three Bulgarians and one Afghan already in detention on Saturday said they were innocent as a court in Hungary remanded them in custody until September 29.

The dead were thought to be Syrians and police believe they suffocated and had been dead for up to two days before the truck was discovered by motorway maintenance workers due to decomposing body fluids dripping from the vehicle.

Hungarian news portal Index.hu on Sunday quoted the Hungarian driver of another vehicle as saying that he saw the driver of the truck running away from the back doors in panic and being picked up in a car that then sped off.

On Sunday Austrian police said that three Syrian children rescued with severe dehydration on Friday from a van packed with migrants were taken out of hospital by their parents and “vanished”, most likely to Germany.

“The van was driven by a Romanian and had Spanish number plates and arrived from Hungary,” spokesman David Furtner told AFP. “This year we have arrested 93 people traffickers in Upper Austria state alone. Most escape though.”

The Austrian government on Sunday announced on Sunday it was “massively stepping up” checks at the Hungarian border.