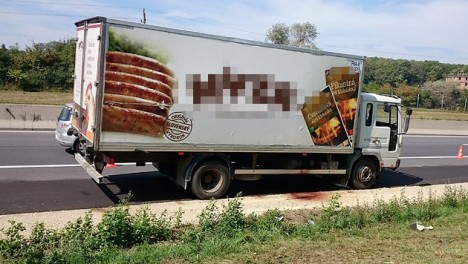 A powerful stench of human decay emanated from the cargo container where bodies of migrants lay piled on top of each other, crammed into a small rectangular space.

There were “at least 20, but there could be as many as 40 or 50”, said police spokesman Hans Peter Doskozil.

Motorway patrols made the gruesome discovery after they noticed the abandoned lorry on an emergency lane off the A4 highway in Burgenland state, close to the Hungarian border.

Faced with a sea of tangled limbs, officers at the scene were unable to determine the exact number of dead, assess people's gender or determine whether there were any children among them.

After police cordoned off part of the motorway, forensic teams wearing face masks worked feverishly to secure evidence, while police dogs searched the area for further clues as to what happened in this tragic spot.

Drivers stuck in a rapidly-growing traffic jam got out of their cars and snapped photos of the scene before uploading them on social media websites.

Eventually the lorry — which had the markings of a Slovakian poultry company and bore Hungarian number plates — was towed away in the early afternoon for further analysis.

Police said it would take at least until Friday morning before details about the victims' identities or cause of death could be revealed.

Even experienced officers appeared visibly shaken as they described the “shocking crime”.

Working in collaboration with Hungarian authorities, Austrian police have launched a cross-border hunt for the missing driver, believed to be Romanian.

Initial investigations revealed the truck had left Budapest on Wednesday morning, before being sighted near the Austrian border overnight.

It is still unclear when the truck was left near the motorway.

The gruesome find came as German Chancellor Angela Merkel and Balkan leaders were meeting in Vienna to discuss how to tackle the biggest migration crisis in Europe since World War II.

“We were all shaken by the horrible news that up to 50 people died… these were people coming to seek safety,” Merkel said.

“This is a warning to work to resolve this problem and show solidarity.”

This year has seen record numbers of people trying to reach the EU by sea and land as they flee conflicts in Africa, Asia and the Middle East.

In Austria, the number of asylum requests rose above 28,300 between January and June alone — as many as for the whole of 2014 — and officials expect the total to reach 80,000 this year.