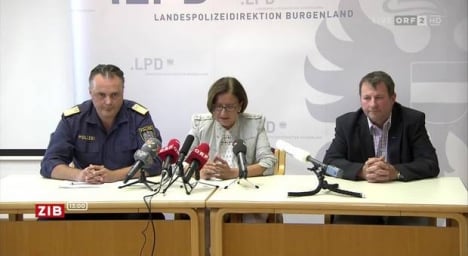 The vehicle, which police initially believed contained between 20 and 50 bodies, was found on a parking strip off the highway in Burgenland state, police spokesman Hans Peter Doskozil said at a  press conference with Interior Minister Johanna Mikl-Leitner.

The interior ministry said Friday morning that colleagues had been recovering the bodies throughout the night and they confirmed that four children are among the victims. “Today is a dark day…  This tragedy affects us all deeply,” Mikl-Leitner said on Thursday.

“Human traffickers are criminals. Anyone still thinking that they're kind helpers cannot be helped.”

The truck was sold to a Romanian man living in central Hungary.  Police across Europe have been alerted and are hunting for him in connection with the tragedy.

The “horrible” discovery Thursday of between 20 and 50 dead migrants on a truck in Austria is a warning to Europe to get to grips with the migrant crisis, German Chancellor Angela Merkel said.

“We were all shaken by the horrible news that up to 50 people died… although these were people coming to seek safety,” Merkel said in Vienna.

“This is a warning to work to resolve this problem and show solidarity”.

Western Balkan countries are facing “huge challenges” handling tens of thousands of migrants trying to get to the EU, she added.

“It is our responsibility to help them.”

It is thought that the truck had been parked in the area since Wednesday.

“We cannot confirm yet how they died,” Doskozil added.

Forensics teams at the scene said it would take several days to secure evidence.

The minister announced Austria would tighten its border controls and intensify checks on international trains in the coming weeks.

She also called on the other 27 member states of the European Union to show “zero tolerance” for people smugglers.

The gruesome find comes as German Chancellor Angela Merkel and Balkan leaders are meeting in Vienna to seek how to tackle together the biggest migration crisis to hit Europe since World War II.

They reacted with shock to the news of the dead migrants. Influx of refugees from FYR Macedonia to Serbia includes exhausted mothers with children resting in any kind of shade they can spot. Photo: UNHCR/I.Szabo

This year has seen record numbers of people trying to reach the EU by sea and land as they flee conflicts in Africa, Asia and the Middle East.

In Austria, the number of asylum requests rose above 28,300 between January and June alone — as many as for the whole of 2014 — and officials expect the total to reach 80,000 this year.

Ahead of the conference, Austria's Foreign Minister Sebastian Kurz warned that his country would consider introducing tougher anti-migration measures including “much tighter border controls”, if the EU failed to come up with a unified response.

Hungary said it would join the investigation into the discovery Thursday of between 20 and 50 dead migrants on a truck in Austria after it emerged the vehicle had Hungarian number plates.

“Austrian and Hungarian police will work closely together to take the necessary steps to investigate what happened and apprehend those responsible,” Prime Minister Viktor Orban's spokesman Janos Lazar said, adding that Hungary had been informed by Austrian police that the driver was Romanian.

“It appears that the victims were illegal migrants in a human trafficking operation.”