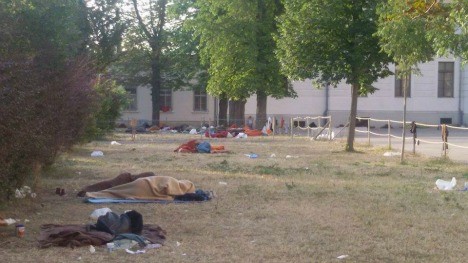 Markus P., who has both Austrian and Afghan roots and was reporting for the Swiss paper “Tagesanzeiger”, says he did not have difficulties conning the security services at the centre, which is operated by the company ORS on behalf of Austria's Interior Ministry.

“There is a security guard but he cares little about the security,” he said. “You can climb over the fence, which asylum seekers do if they do not want to wait at the entrance for their ID's to be scanned. I could even at one point pass by the security, going in and out of the gate. They were not at all interested.”

Once inside the centre, he stayed there for two days and filmed inside the camp using a hidden camera.

He said he first noticed the rubbish around the camp, which was removed once a day by asylum seekers who received 3€ an hour to carry out cleaning services.

The reporter added: “I have seen very many Toilets, several times, and never have I found toilet paper.” There were also allegedly no opportunities to take German lessons.

He also claimed that the centre is home to a black market in donations.

“That is well organised,” he said. “Some young men stand at the fence and accept donations, which they then sell in the camp, swap for other goods, or keep for themselves. Water is the only thing everyone receives over the fence.”

Head of operations at ORS, Wilhelm Brunner, rejected the allegations that there was no toilet paper and said refugees receive a packet and are able to claim additional paper at any time.

He added that German lessons are no longer offered because overcrowding meant they had to use the space as accommodation.

“We have constantly communicated with the Ministry about our assessment of the situation and the fact that capacity has been exceeded. Due to the extremely difficult situation it is no longer possible for us to fulfil all the services as stipulated in the contract,” Brunner said, adding that he had “no knowledge of a black market in the care facility.”

The undercover report follows complaints earlier in August by Amnesty International that there are “no respect” for human rights at Traiskirchen.

The human rights organisation criticised the “inhumane conditions” after visiting the centre and speaking to 30 asylum seekers.

Amnesty Austria General Secretary Heinz Patzelt said inspectors were particularly concerned about 1,700 under age refugees who appeared to have no-one to care for them.

He also criticised the fact that parents were not always housed in the same quarters as their children and that women had to shower in the same facilities as the men, with no curtains or privacy.

“The failure in the care of refugees could have easily been avoided, the blame lies primarily with administrative errors,” he said.