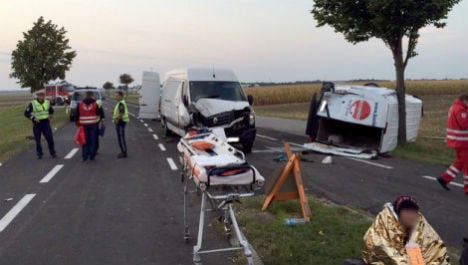 The two vans crashed into each other at around 4:30 am on Monday in Nickelsdorf.

“One small transit van drove into the back of another. The van in front crashed into a tree and rolled over, landing on its roof,” police spokesman Wolfgang Bachkönig said.

He said it’s thought that the two vans were carrying a total of 90 refugees. Some of them ran away after the accident. Five people were seriously injured and more than 30 were slightly injured. Twenty-one people were taken to hospitals in Kittsee, Eisenstadt and Hainburg.

Police patrols were on the lookout for more injured refugees on Monday morning and a temporary first aid centre has been set up near to the site of the crash. The uninjured refugees were taken to a collection point in Nickelsdorf.

The drivers of the two vans are missing and are believed to have fled in a car “that was acting as a support vehicle”, Bachkönig said.

A total of 45 emergency service personnel were called to the scene, including nine ambulances, six paramedics, local fire fighters and two special task forces trained to work in the aftermath of disasters and road accidents with a high number of casualties.

On Sunday police found 47 refugees from Syria, including eight children, in a van in Mönchhof. Increasingly, refugees are becoming victims of traffic accidents as smugglers cram them into small, unroadworthy vans.

The interior ministry expects the total number of asylum requests to reach 80,000 this year. But it is Germany, and not Austria, which is usually the chosen destination for refugees who are smuggled through the country, according to Colonel Gerald Tatzgern, head of the central office for combating people smuggling and human trafficking.

He estimates the cost of smuggling someone to their chosen country to be between €5,000 and €15,000. People smuggling organizations are making an estimated annual turnover of at least €400 million, he added.