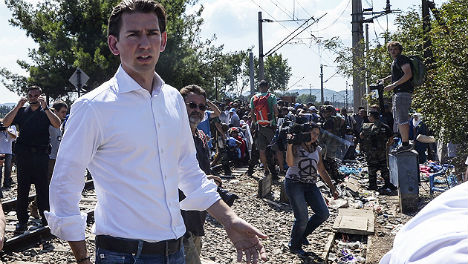 Visiting the frontier between Greece and Macedonia, a new flashpoint in the crisis, Kurz also deplored the “lack of checks on migrants” within the European Union.

“It's a humanitarian disaster, a disaster for the European Union as a whole, and there is a pressing need for us to focus on the situation in the western Balkans,” he told reporters.

“We have to find a new strategy to support Greece and the western Balkan countries.”

The EU is grappling with an unprecedented influx of people fleeing war, repression and poverty in what the bloc has described as its worst refugee crisis in 50 years.

Nearly 340,000 migrants have arrived in the EU in the first seven months of this year, according to the bloc's Frontex border agency.

Greece has recorded 160,000 since the start of the year, mainly coming in via Turkey.

More than 42,000 have gone through Macedonia since mid-June to try to enter the European Union, particularly the countries of the passport-free Schengen area.

German Chancellor Angela Merkel is travelling to Vienna on Thursday, where she will meet with leaders of Balkan states including Albania and Kosovo to find out why “so many thousands of people are coming from these countries”, according to her spokesman Steffen Seibert.

France and Germany are both urging Brussels to compile a list of countries whose nationals would not be considered asylum-seekers except in exceptional personal circumstances.

France's and Germany's leaders will also try to help fast-track the setting up of reception centres in overwhelmed Greece and Italy – two countries that have borne the brunt of the crisis – to help identify asylum-seekers and illegal migrants.