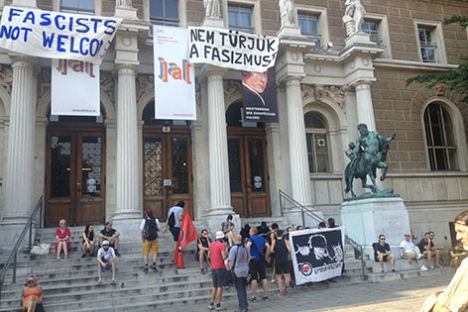 Protestors outside the Academy of Fine Arts. Photo: ORF/Hubert Kickinger

Police said that six adults and one child arrived in Vienna by bus on Wednesday. They parked on the Getreidemarkt and then walked through the city centre, accompanied by police.

They had planned to visit the Academy of Fine Arts on Schillerplatz, where Adolf Hitler had applied to study but was rejected. The rector of the art school said that he was against the planned visit and the main entrance was kept locked until the early afternoon, to prevent the neo-Nazis from entering.

Police have not released the identities of the members of the group. Austria’s Office for State Protection and Counter Terrorism said that it knew of the group’s planned visit in advance but was not able to prevent it as it was not a demonstration or gathering.

On Thursday the group plans to visit a military museum in Sonntagberg in the north east of Austria and also plans to visit Hitler's birthplace in Braunau, Upper Austria. Police said that the neo-Nazis plan to spend the night there and then continue on to Bavaria in Germany.

The anti neo-Nazi group 'braunau gegen rechts' called on the authorities to prevent the Hungarians from continuing their journey, calling them members of a “particularly dangerous neo-Nazi network which has long been banned in Germany”.

“Members of the Blood & Honour network are responsible for murders, attacks and raids. They even have an armed group called Combat 18,” braunau gegen rechts spokesman Raphael Schöberl said.

Blood & Honour was founded in the UK in 1987, taking its name from the motto of the Hitler Youth; ‘Blut und Ehre’. It has been outlawed in Germany, Spain and Russia.