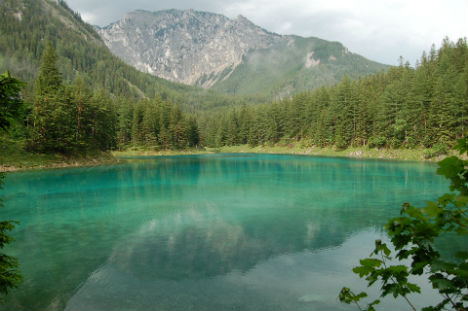 The Green Lake (Grüner See) is one of Austria’s most stunning natural features. Aptly named, its crystal-clear waters are a beautiful emerald green colour, and a still day creates perfect reflections of the surrounding mountains. But the Green Lake does not stand out for its beauty alone – this lake has a hidden feature below its waters. During winter, the lake is only around 1 or 2m deep, and is a popular route for alpine hikers. In the spring, the lake transforms as the winter snows in the surrounding Hochschwab Mountains melt and cause the basin below to fill with water, submerging the park at the bottom. From mid-May to June, the lake is around 12m deep and transforms into a unique place to go scuba diving. Divers can don their snorkels and flippers to swim amongst park benches and bridges, over trees and gravel paths. The crystal-clear water also creates stunning light reflections and rays underneath the water on a clear day. Hollywood star Ashton Kutcher is even a fan – calling it “the real life Atlantis” after a visit in 2014.

The world’s longest pedestrian suspension bridge stretches from the Ehrenberg Ruins to Fort Claudia, at a vertigo-inducing 114.6m above the ground. Not for the faint hearted, the bridge was constructed in 2014 at a cost of almost €2 million. It is 406m long, 1.2m wide and can carry up to 500 people at any one time. Architect Armin Walch originally designed a 250m long bridge, but later revised his plans to build the longest suspension bridge in the world. The previous record was held by the Kokonoe Yume Bridge in Japan, which is 390m long. At more than 42km long, Eisriesenwelt is the largest ice cave in the world, and according to Austrian legend is supposed to be the entrance to hell. The name translates as World of the Ice Giants, and it is not difficult to see why. The cave is entirely natural, and was created over a very long time – the first cracks and fissures in the limestone formed around 100 million years ago! They developed over time into caves, cooled by air entering through cracks in the earth’s surface. Melted snow then entered the cave in the spring and would freeze over inside the cave, which has a temperature of below zero degrees, creating the spectacular ice formations that can still be seen today. The cave was first discovered in 1879, but its full extent was not realised until after World War One. Before its discovery, the cave was known only to locals, who refused to explore it as they believed it to be the entrance to hell! Today, you can take a guided tour of the cave lasting for 1 hour 15 minutes. This covers a fraction of the vast cave – the only bits that are covered in ice – and the ice sculptures are simply mind-blowing. The Giant Nose of Wachau is, unsurprisingly, a giant nose on the banks of the Danube. The four metre high art installation sits at the ferry stop of St. Lorenz, and is supposed to look as though a giant is lying under the ground with only his nose sticking out. People can walk through its giant nostrils, which fill up with mud when the Danube floods. When planning this project, the art collective gelitin sought local ‘nose models’ upon which to base the finished product. They invited all ‘Wachau noses’ to an event, at which they measured, photographed and took casts of the noses of many different locals before settling on a final design. Starkenberg Castle offers visitors a rather unique way of bathing – in seven 13 ft long pools full of warm beer (and a bit of water). The cellar of the 700-year-old castle is home to the spa-like baths which hold 84,000 litres of beer. The former fermentation rooms were modified by artist Wernfried Poschusta. You’re not allowed to drink from the pools (probably a wise idea), and must order one of the castle’s ten varieties in a glass if you just can’t get enough beer. Apparently sitting in the beer, which is rich in vitamins and calcium, is good for the skin and helps heal open wounds and psoriasis, and improves circulation. The successful Austrian crystal manufacturer Swarovski has become a byword for affordable luxury. And visiting the Swarovski Kristallwelten, part theme park, part museum, is like stepping inside an eccentric and very bling fairy tale. Its entrance is known as the Giant, a huge grass mound designed by multimedia artist André Heller that has the face of a man on its front, with a waterfall pouring out of his mouth. A series of “chambers of wonder” designed by artists include a mechanical theater in which dress shirts swoop by on suspended tracks and trousers are suspended from the ceiling in a disembodied circus and a room containing a 20-foot tall crystal Christmas tree created by Tord Boontje and Alexander McQueen. After Schönbrunn palace in Vienna, Kristallwelten is Austria’s second most popular tourist destination.