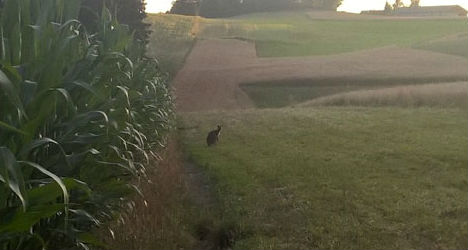 At first Martin Helmstedt thought he was being pranked by local youths but realised the kangaroo was real and very much alive after he almost tripped over it whilst walking in a field of corn in St. Oswald bei Haslach.

The kangaroo hopped off and then sat looking at him from a distance of around ten metres, he told Austrian broadcaster ORF, adding that it seemed very tame.

Worried that the exotic animal might be shot by local hunters, he stopped to tell an elderly couple what he had seen. A team from Radio Upper Austria then made enquiries with the local police and fire departments but nobody had reported a runaway kangaroo.

However, on Tuesday the Kronen Zeitung reported that a man from Bavaria had been in touch to say that he thinks the kangaroo may be his pet, Paul, who has been missing since April after escaping from his enclosure during a thunderstorm.

In January a kangaroo called Anton escaped from his owners in Waldzell, also in Upper Austria, and was living rough for four months in snowy conditions before he was recaptured.

“No kangaroos in Austria” T-shirts and souvenirs have been big sellers for years, since some people confuse Austria with Australia.