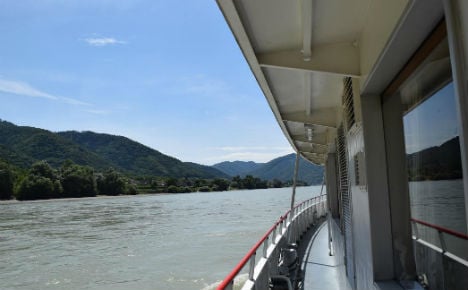 This year, figures are expected to exceed that, making the Danube the most popular river in Europe.

It’s not difficult to see why.

Stretching from the German Black Forest to the Black Sea in Romania, the Danube is the second largest river in Europe.

It is Austria’s most important river, connecting the heartlands of Lower and Upper Austria with Vienna. Sections such as the ‘Schlögener Schlinge’, a large loop between Passau and Linz in Upper Austria, are popular amongst nature-loving tourists who flock to its cycle paths and nature trails.

The Danube then winds into the picturesque Wachau region of Lower Austria, where boat cruises are particularly popular. The area stretches from Melk, home to the impressive Benedictine monastery Melk Abbey, to the medieval town of Krems, some 35 km further along the river.

It boasts rolling hills, many covered with grapevines, and tiny, picturesque Austrian villages – exactly what tourists want to see. A cruise along this section of the river is increasingly popular, and the small towns of Dürnstein and Spitz, where the boats stop, are becoming dominated by crowds of camera-wielding visitors. In Spring, one of the biggest German cruise providers went into liquidation. But the numbers of American and Australian tourists on the Danube are so high that they have made up for the loss of German visitors: “The Americans are conquering the Danube”, Toni Aigner, who owns a boat on the river, told the Kurier newspaper.

The benefits of increased tourism for the local communities are undeniable: more business, more publicity, more money. However, swarms of tourists also have their downsides.

Some locals are critical of the way organised cruises allow tourists to swoop in in their hundreds and then leave a couple of hours later, having consumed no more than a glass of wine, and leaving all their rubbish behind.

Yet many businesses along the banks of the Danube are dependent on tourism to survive. Michael Pilcher owns a pottery business in Melk and says up to 90 percent of his sales are to tourists.

There is no doubt that tourism is vital to the local economy, so the recent boom is welcomed by the majority.