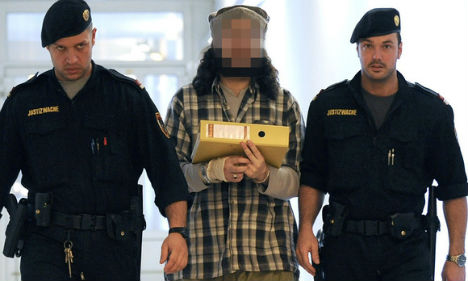 The five-minute clip shows two German-speaking men use assault rifles to kill two bound and kneeling male hostages in the Syrian ancient city of Palmyra, which Isis fighters took in May.

In a rare German-language Isis message, they urge their “brothers and sisters” in Germany and Austria to join Isis in Syria and Iraq, or commit attacks against “unbelievers” at home.

Die Presse newspaper reports that one of the gunmen has been identified as Austrian Mohammed M. (30), the son of Egyptian immigrants.

Speaking partly in Arabic, and partly in German with an Austrian accent, M. threatens Chancellor Angela Merkel. He vows to avenge the “blood of Muslims spilled in Afghanistan”, where Germany sent troops as part of a Nato force, and their support for the coalition against Isis.

Mohammed M. was sentenced to four years in prison in Vienna in 2007, on charges of forming a terrorist group.

After his release in 2011 he fled to Germany and Egypt. He was later arrested in Turkey, but set free again. Since then, he is thought to be fighting with Isis in Syria. He now calls himself Abu Usama.

On Wednesday Austria's Interior Ministry said that it still had to verify the authenticity of the video.