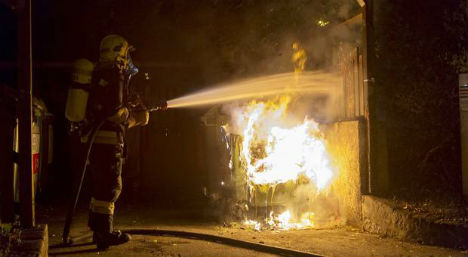 A fireman putting out one of the blazes. Photo: Feuerwehr Krems

The 19-year-old, who is an apprentice and ironically a volunteer fireman, was caught setting fire to a pile of wood on a tow path, shortly after having set fire to a rubbish bin in the town centre on Tuesday evening.

He admitted being responsible for seven other fires in the previous week but said that a friend had forced him to do it – by threatening to press charges about a traffic accident in which he and his girlfriend had been injured.

When police questioned the alleged blackmailer he admitted that his friend was telling the truth.

The 19-year-old is also a firefighter, but only as part of ancillary services. “We are very disappointed,” Gerhard Urschler from the town’s fire brigade said.

A spokesman for the regional fire service command, Franz Resperger, said the youth will face disciplinary proceedings and will no longer be allowed to work as part of the fire department.

“People can now relax, this series of arson attacks is over and the two offenders have been caught and have confessed,” local police chief Manfred Matousovsky said.