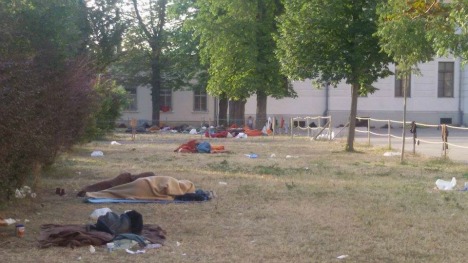 Asylum seekers sleeping in the grounds of Traiskirchen. Photo: ORF

The centre in Traiskirchen, 20 kilometres south of Vienna, would no longer accept new migrants as of next Wednesday, Lower Austrian governor Erwin Pröll said.

The camp, which is meant to house 1,800 people, currently holds more than twice as many — 4,500 refugees. Nearly half of them do not have a bed.

“Authorities are taking a clear step with this measure to avoid a further influx into the Traiskirchen camp,” Pröll told the press.

He said he had taken the decision after many of the registered migrants had failed to present themselves for a health check-up to assess potential risks of epidemic.

As a result, an “accurate appraisal” of the camp population's general health had not been possible, which represented a risk from a medical point of view.

During a recent visit to the camp, the representative of the UN's refugee agency, Christopher Pinter, described the situation in Traiskirchen as “inadmissible, dangerous and inhumane”.

Human rights group Amnesty International is due to inspect the camp in the coming days.

It expects at least 75,000 asylum seekers to arrive by the end of this year, with a majority coming via Serbia and Hungary.