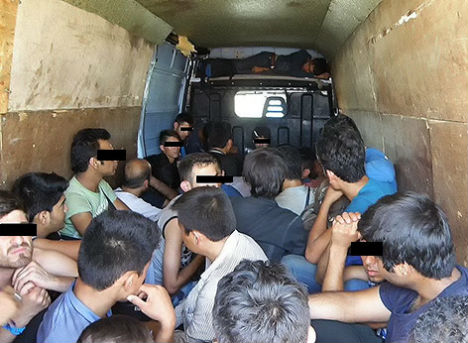 42 people were hidden inside this van. Photo: LPD NÖ

The interior and justice ministries have pledged to step up the fight against people smuggling, and have presented a “five point plan”. This includes an increase in the number of specialized investigative teams, stricter punishments for smugglers, more specialized prosecutors and increased enforcement along Austria’s borders.

Both Austrian and Hungarian officials will be involved in border checks, and controls are already taking place on trains leaving Budapest for Austria, Interior Minister Johanna Mikl-Leitner told Ö1 radio.

She added that she is talking to her Hungarian counterpart about how to facilitate a complete control of all incoming trains from Hungary, and how to monitor Hungarian railway stations.

The Ministry of Justice is planning to establish a team of specialized public prosecutors to deal with people smuggling cases.