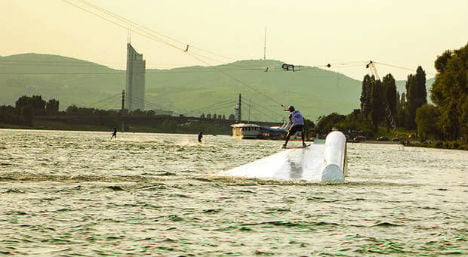 Wakeboarding on the Neue Donau. Photo: Wake Up

The 42-year-old was wakeboarding on the river and was being towed by a cable system when she fell, catching and severing her forearm between the elbow and wrist in the cable.

Onlookers rushed to help the woman, pulling her out of the water and calling an ambulance, which took her to hospital.

Fire brigade divers were able to recover the woman’s forearm from the river two hours after the accident. It was put on ice and rushed to a team of surgeons at the hospital.

However it’s still unclear whether it could be reattached, and Vienna general hospital spokeswoman Karin Fehringer told the Kurier newspaper that she did not want to comment.

Police are still investigating exactly how the accident happened. It’s possible the cable attached to the winch became tangled around the woman’s forearm. Police spokesman Thomas Keiblinger said no witnesses to the accident had come forward and that the victim was not in a state where she could be questioned.

Michael Machek, the operator of the wakeboard course told the Kurier that it was a “tragic sports accident”. The cable system had been approved by the city authorities before the start of the summer season, he said, and was not faulty.