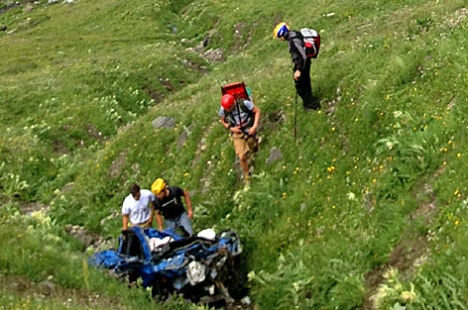 The men, aged 22 and 25, were driving a Seat Leon when their vehicle suddenly skidded to the right, broke through a crash barrier and plummeted 300 metres.

They were taking part in the Great European Rally, an eight-day drive through seven countries which begins in Belgium and finishes in Hungary. The pair had spoken of the dangers of the trip on social media before they died, it has emerged.

Helicopters were sent to the crash site to help recover the bodies.

Police told the Austria Press Agency that the British driver of a Porsche, who witnesses said had been racing with the Seat, turned up at a local police station later on Friday morning.

He told officers he and another man he was with had been taking part in the same event and had been staying in the same hotel as the two men who were killed.

Salzburg police said they were treating the crash as an accident.

The scenic Grossglockner road leads from the town of Bruck, near Salzburg, to Austria's highest mountain, the 3,798-metre Grossglockner.

The 48-kilometre (30-mile) route is renowned for its many treacherous bends.