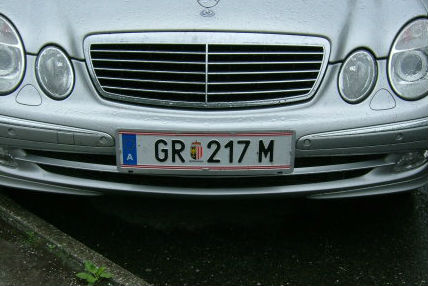 This one should be OK... Photo: Olav's Plates

Abbreviations such as SS (Schutzstaffel), NSDAP (Nazi Party), and HJ (Hitler Jugend) will no longer be allowed, as well as combinations of numbers that use simple substitution codes, where letters are represented by numbers.

These include 88, which stands for Heil Hitler, 1919, the code for the SS, as well as 74, the code for a pan-Germanic single nation state. All are popular with the far-right.

Transport Minister Alois Stöger (SPÖ) said the decree is “an important signal against the far-right”.

The list of codes has been created with the support of the Mauthausen Committee – and will be updated constantly. Combinations such as IS or ISIS (Islamic State) are also forbidden.

The decree does not affect old personalized number plates – just new ones. Personalised number plates are valid for 15 years and the owner must reapply when they expire – at which point officials will be on the lookout for right-wing codes.

More than half a million Austrians have a personalized license plate.

Just last week a cemetery plot owner in Linz was told to remove Nazi symbols from two tombstones after complaints from visitors to the cemetery.