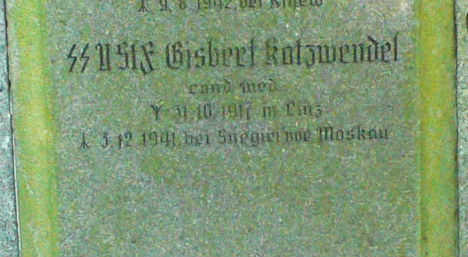 The cemetery is the final resting place for an SS second lieutenant who died in 1941, Gisbert Katzwendel, and a clerical worker for the Nazi party, Friedrich Katzwendel. The SS lightning bolts proudly worn by the elite Nazi troops are carved into their tombstones.

Under an Austrian law enacted in 1947, Nazi regalia and symbols may not be publicly displayed. In the past it has been argued that the law need not apply to depictions created before 1947 – such as tombstone carvings.

Uwe Sailer told the Kurier newspaper that he has to pass the graves in question when he goes to visit his father-in-law’s grave, and is filled with disgust every time he sees them.

“It's disgusting and a nuisance that this is on public display,” Sailer said. “For a long time I’ve been hoping that this insignia would be removed but nothing has happened,” he complained. He finally contacted the Upper Austrian network against right-wing extremism.

The organisation’s spokesman, Robert Eiter, said he was outraged. “These runes are Nazi symbols and therefore forbidden by law”. He added that it was “incomprehensible that the grave owners had not had them removed – and the cemetery administration should not have ignored this. We’re now demanding that they be removed as soon as possible,” he said.

Karin Weilguny, head of the cemeteries and burials department in Linz, told the Kurier that the city’s legal team has written to the owner of the plot, requesting that the banned symbols be removed by no later than July 27th. She said it was the first she had heard of the Nazi symbols. “This isn’t something we approve of and therefore we’re happy to have been tipped off”.

She added that she regretted that the runes went unnoticed when ashes were last interred in the family plot in 2010. “Our staff have now been instructed to keep an eye out for such a thing in the future.” She said that if the grave owner failed to do anything by the deadline, city officials would remove the symbols themselves and send the owner the bill.

Last year the owner of a cemetery plot in Graz was ordered to cover up a swastika on a grave dating from 1934, or pay a €4,000 fine.

At the time some people argued that the swastika should be allowed to remain in cemeteries as a “political and societal symbol” of the era.