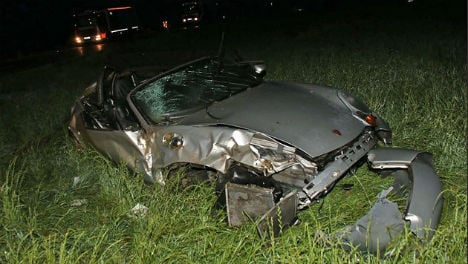 He fractured part of his spine and his 15-year-old passenger was slightly injured.

Police said that the sports car belonged to a car dealer, whose son had allowed the pair to drive it.

The 16-year-old, who is not old enough to have a driver’s license, lost control of the vehicle whilst driving at high speed as he took a curve on the L6051.

The car skidded into a guardrail, catapulted into the air, rolled over several times and landed 40 metres away in a meadow. Both teenagers fled the scene of the accident and did not report the crash.

Police found the boys later on Saturday in Hart bei Amstetten and took them to hospital. The 16-year-old had multiple fractures of the thoracic vertebrae and bruising. His passenger had numerous sprains and bruising. The St. Pölten prosecutor has ordered a blood sample from the 16-year-old.

The Porsche – now a total write-off – was used as a display vehicle in the car dealership and was not meant to be driven. It even had a fake number plate.

Police believe the teenage tearaways got hold of the vehicle just 15 minutes before the crash.

They are still investigating exactly what happened.