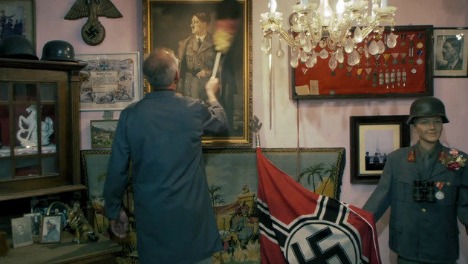 The 58-year-old man has a collection of Nazi flags with swastikas on, army uniforms and other memorabilia in his cellar in Mattersburg, Burgenland.

It came to public attention after he appeared in Ulrich Seidl’s film In the Basement, about people’s obsessions and what they do in their basements in their spare time.

Seidl filmed for six days in the man’s basement in 2009. In the finished film the man is seen drinking and singing with four friends, under a portrait of Adolf Hitler. Two of the men were local People's Party councillors who resigned after the film premiered in 2014.

The 58-year-old man was found guilty on two counts of breaking the Prohibition Act, which aims to suppress any potential revival of Nazism. In the film he described the Hitler portrait as the “most beautiful wedding gift I ever received”.

By agreeing to appear in the film, the judge said that he intended that his Nazi memorabilia should reach a broad audience, and he was also found guilty of playing a Nazi-era song on a wind instrument.

The defendant's lawyer said that his client plead not guilty but that he now realised it had “not been a great idea” to appear in the film. His client was “a passionate collector” he said, but he argued that it was not a crime to keep Nazi memorabilia in his basement, as long as he did not put it on show or advertise it.

The defendant said that he was not a Nazi but was just interested in history.

He and his companions said that Seidl had given them some direction as to where they should sit and what they should do when filming their scene. The defendant said he had had doubts as to the legality of what they were doing but that Seidl had reassured him that it was fine and that the film would probably be “a flop” and wouldn’t be shown in cinemas.

Seidl strongly denied having said this, saying that when the man signed the contract and release form it was perfectly clear what he was agreeing to. He said that the film shoot had been planned and choreographed in advance but that he had not told the men what to say. Seidl also said that he did not believe that the man was a Nazi.