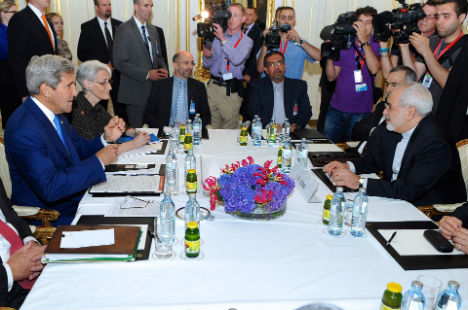 John Kerry and Mohammad Javad Zarif at a meeting in Vienna. File photo: US Department of State

“We may not make June 30th, but we will be close,” the senior official told reporters as top US diplomat John Kerry prepared to head to Vienna on Friday for what could be the last talks between Iran and global powers on the deal.

The official said the target date to finalise the historic deal — the main outlines were agreed in April in Lausanne, Switzerland — would only “slip” by a few days.

“The intent of everybody here — the P5+1, the European Union, Iran — is to stay until we get this done, or find out we can't. And our intent is to get it done,” the official told reporters, asking not to be named.

Others, including Iranian Foreign Minister Mohammad Javad Zarif, who is due in Vienna on Saturday, have said the deadline may be missed by a few days but until now Washington had insisted it still aimed to get a deal on schedule.

“We can truly see a path forward that gets us to a very good agreement here. We know what the pieces of it are,” the US official said, adding that in the end, Iran was facing “critical choices.”

Iran, which has engaged in something of a rapprochement with the West since the election of President Hassan Rouhani in 2013, denies wanting nuclear weapons, saying its nuclear programme is exclusively peaceful.

Under the Lausanne framework, which was also agreed several days late, Iran will downsize its nuclear activities in order to make any attempt to make a nuclear weapon all but impossible.

This includes Iran cutting the number of centrifuges enriching uranium, which is used in nuclear power but also for a bomb when highly purified, as well as slashing its uranium stockpiles and changing the design of a new reactor.

In return, UN and Western sanctions that have caused Iran major economic pain would be progressively lifted, although the six powers insist they can be easily “snapped back” in place if Tehran violates the accord.

Spanners in the works

The mooted final accord between Iran and the “P5+1” — Britain, China, France, Russia and the United States plus Germany — will be a highly complex agreement 40-50 pages long, including several appendices.

It will set out an exact timetable of sanctions relief and reciprocal steps by Iran, as well as a mechanism for handling possible violations by either side.

Tricky issues include how UN sanctions might be re-applied, the reduction of Iran's uranium stockpile and its future research and development on newer, faster types of centrifuges.

Iran must also address lingering questions about the possible military dimensions of its nuclear program to the satisfaction of the UN watchdog, the IAEA.

Amid unease in Iran's conservative-dominated parliament that Tehran is giving too much away, the country's supreme leader, Ayatollah Ali Khamenei, on Tuesday appeared to throw several spanners in the works.

Western powers have stressed sanctions will not be lifted until the IAEA has confirmed that Iran has carried out key steps under the accord.

But Khamenei, who will have the last word for Iran in the talks, said banking and economic sanctions imposed by the United Nations and the US must be lifted immediately after the agreement is signed.

“Other sanctions can be removed gradually by a reasonable timetable,” Khamenei said.

He also reiterated that Iran would not permit the IAEA to visit military sites or conduct “unconventional inspections” at other facilities.

Khamenei also took issue with the length of time that some of the restrictions on Iran's nuclear activities would be in place.

In a further sign that Iran remains at odds with the West, Kerry unveiled a highly critical annual rights report slamming Iran for continuing to “severely restrict” civil liberties.

By Jo Biddle in Washington and Simon Sturdee in Vienna/AFP