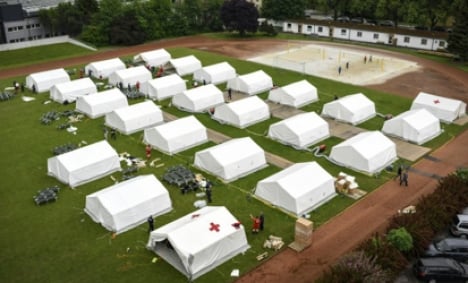 A tent camp set up for asylum seekers. Photo: Vol.at

Interior Minister Johanna Mikl-Leitner says that if accommodation is not found for asylum seekers, they must be housed in army barracks.

Only Vienna, Lower Austria and Styria have met, and exceeded, their quotas so far.

The Traiskirchen refugee processing centre in Lower Austria is overflowing and the situation is getting worse.

3,000 asylum seekers are currently there and 700 don’t have beds and have to sleep on the floor, in garages and waiting rooms, or outside, Caritas Secretary General Klaus Schwertner said.

The interior ministry has said that 300 people from Traiskirchen will be sent to other states.

The mayor of Wiener Neustadt, Klaus Schneeberger (ÖVP), has offered to host 400 refugees from Traiskirchen in the Arena Nova venue. Beds have already been set up but the move has been heavily criticised by the right-wing Freedom Party. Mikl-Leitner praised Schneeberger for his “compassion and courage”.

Carinthia’s government has refused to house asylum seekers in army barracks – saying that the Bleiburg barracks in question are too close to swimming pools, playing fields and schools as well as being close to the border with Slovenia – which could make them “a magnet for people traffickers”.

The governor of Upper Austria, Josef Pühringer, has called for tent camps that have been set up for asylum seekers in his state to be dismantled by the end of next month.

Klaus Schwertner has demanded the government make more money available for the cost of caring for asylum seekers – saying that €19 per day per person was too little.

Austria is expecting as many as 70,000 asylum requests this year, mainly from Syria and Afghanistan.

This week Austria stopped processing asylum requests in an effort to pressure other European Union member states to do more to help absorb waves of refugees pouring into the continent.

Mikl-Leitner has also made deporting asylum seekers under the Dublin Regulation a priority – which makes the asylum claim the responsibility of the member state which played the greatest part in the applicant’s entry or residence in the EU.