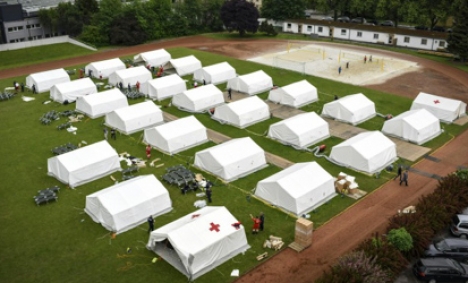 Asylum seekers have been housed in tents. Photo: Vol.at

The Council of Europe Commissioner for Human Rights, Nils Muiznieks, said the move was the wrong way to respond to the problem and that Austria could not “waive its human rights obligations”.

Vienna needs to “stop the Austrian asylum express” and become less attractive to refugees, Johanna Mikl-Leitner told Die Presse newspaper on Friday. She has demanded that other countries adopt fixed quotas for taking in asylum seekers.

“So far there have been only isolated declarations of intent that do not bring us further,” she said ahead of a planned meeting of interior ministers from the 28-nation EU on Tuesday.

Last month the European Commission said it would ease pressure on Italy and Greece, which are struggling to deal with thousands of immigrants crossing the Mediterranean from Libya, through an emergency scheme to redistribute 40,000 Syrian and Eritrean asylum-seekers throughout the EU.

The plan would see France and Germany take nearly 40 percent of the migrants, and both countries have raised concerns about the Commission proposals. Britain, which has an exemption in EU matters on immigration, has said it will not participate in the scheme.

Asylum requests for Austria rose nearly 160 percent in the first four months of the year to 14,225, government data show.

Mikl-Leitner said Austria, which has recently had to house hundreds of refugees in tents, is one of the fastest EU member states when it comes to handling asylum requests – making a ruling within four months on average.

The president of Austria’s Chamber of Commerce, Christoph Leitl, told Ö1 radio that Europe needs to invest in Africa in order to help impoverished people there establish a future. He also called for a “pan-European solidarity”.