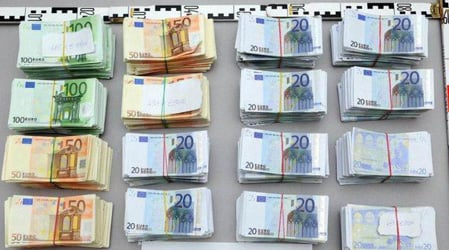 The gang consisted of a 37-year-old Austrian man who was based in Vienna, two Hungarian women and three Hungarian men.

The counterfeit euro notes (in values of €100, €50 and €20) were being sold on the streets of Vienna for half the price of their face value.

Police were given a tip-off after one of the gang tried to sell the fakes to a man in a cafe in Vienna’s 1st district.

Officers then set up a sting operation in Hietzing, and arrested the 37-year-old Austrian who had been trying to sell the fake bills.

Police said this is one of the largest hauls of counterfeit money in Austria since the introduction of the euro in 2002. In a press release they called the arrests “a major blow to organised crime”.

It’s not clear where the fake euro notes were being forged. Police in Hungary have now launched their own investigation.