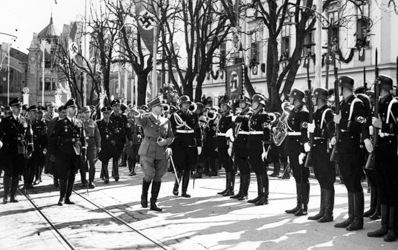 The announcement of the death of Lois Plock in the Kleine Zeitung noted that he was an “Untersturmführer” – a paramilitary rank of Hitler's special SS forces.

SS members served as Hitler's bodyguard and formed elite units that carried out many of the era's atrocities.

The announcement also listed a Nazi-era decoration of the deceased and included a verse associated with the oath of loyalty sworn by Nazi troops to Hitler.

Austria’s Prohibition Act makes any glorification of the Nazi regime a crime.

The newspaper’s Chief Editor Hubert Patterer published an apology for printing the notice on Sunday, one day after it appeared and called it a “horrible mistake”.

“With great chagrin, we beg your pardon,” he wrote. He said it had been published in an error by the advertising department and that policies would be put in place to review the firewall that separates the advertising and editorial departments.

Under current policy, the editorial department has no oversight over advertisements, which include obituaries.

“When it comes to obituaries, we have to review this and put in a second layer of review,” Patterer said.

Published in Graz, the Kleine Zeitung has a circulation of about 280,000, making it Austria's second-biggest paper.