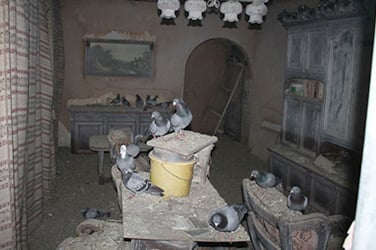 His windows were so dirty hardly any light came through, leaving the house in constant darkness, the Vienna Tierschutzverein animal welfare group said.

His furniture, and the walls and floors of the house were covered with pigeon faeces, feathers and dirt.

A Tierschutzverein team had to carry out three rescue operations, wearing face masks and protective suits to protect them from germs and dirt. They saved 73 pigeons but around 30 birds, along with 66 eggs, did not survive.

"The stench was unbearable and there was the risk of being poisoned by breathing in the excrement,” a press release from the Tierschutzverein said.

Tierschutzverein experts believe that the birds had been kept for several years in these appalling conditions.

All the pigeons were examined by veterinarians. "Some of them were severely malnourished, had parasites and eye damage. In addition, they were severely dehydrated and had probably had no water for days,” they said in a statement.

The Tierschutzverein is now looking for a pigeon fancier who can keep the birds in proper conditions.

The appalling case only came to light after the occupant of the house fell over and called an ambulance. Paramedics and police were then shocked to discover the birds and the horrific living conditions.