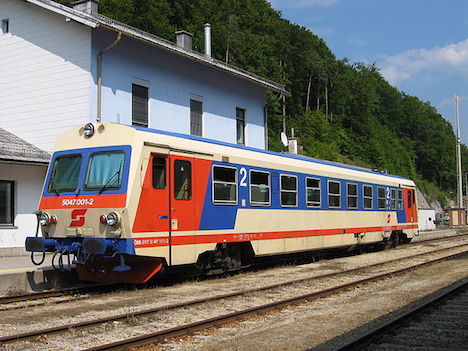 A train similar to the one involved in the accident. Photo: Herbert Ortner/Wikimedia

The man, who was in the car with his entire family, was killed along with his partner and three of their children. Three other children were seriously injured and taken to hospital.

Johann Baumschlager, spokesman for Lower Austrian police, said the man had applied for a driving license in 2008, but it was unclear if he had ever taken the test. “This accident should never have happened,” he said. The man’s partner also didn’t have a driving license, and neither adults should have been behind the wheel, he added.

The Seat Alhambra people-carrier was filled over capacity with the 26-year-old and his 32-year-old partner, along with their six children aged, 4, 5, 7, 8, 11 and 12. It was hit by a train on Friday as it crossed an unmanned level crossing, ignoring a stop sign and driving into the path of an oncoming train.

The vehicle was dragged 90 meters and completely destroyed. Both adults and three of their children (7, 8 and 11) died at the scene and two girls and a boy (aged 4, 5 and 12) were seriously injured and flown to hospital.

Baumschlager said that the five-year-old girl was making a good recovery and had been playing games already. Her younger sister is in a coma but said to be in a stable condition. Their 12-year-old brother is still being treated in St. Pölten but will be relocated to Linz hospital on Friday “to be with his siblings”.

Baumschlager said it was unclear why the 26-year-old driver had failed to stop at the level crossing. Volunteers and emergency service staff, as well as locals from Purgstall an der Erlauf are still in shock after the tragic accident, he added. Mayor Christoph Trampler said he had never experienced such a tragedy before.

Last year in Austria there were 87 accidents at level crossings, 11 of which were fatal. Baumschlager said the most common causes of such accidents were when drivers got distracted by a mobile phone call or noisy children in the vehicle.